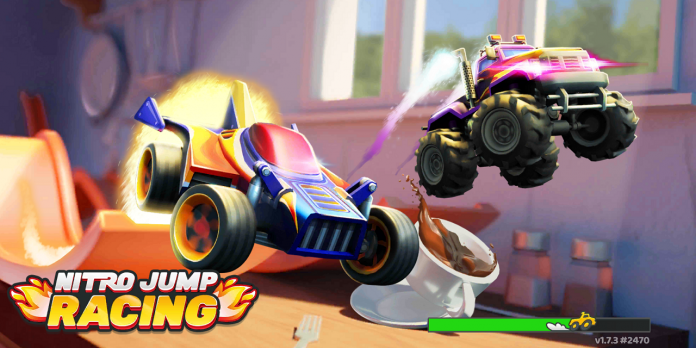 Byss Mobile, the developer behind titles such as MajorGUN 2 and Voxly, has announced a partnership with leading digital game publisher Miniclip to scale Nitro Jump Racing for iOS and Android.

Building on the strong foundation of Nitro Jump Racing, Miniclip brings its extensive experience as one of the world’s leading mobile publishers, to grow the title and continue its success with launch ops, long term improvements and post launch support.

Nitro Jump Racing is an adrenaline fuelled PvP racing title for mobile, where players build their very own collection of toy cars to compete on exciting and imaginative tracks in kitchens, bathrooms and gardens, complete with a wide variety of obstacles and loops. After two years of development, the game launched worldwide on the App Store and Google Play in January 2021. Nitro Jump has already garnered significant praise for its high production values and enthralling gameplay.

Maciej Gąsiorowski, Head of Gaming at Byss Mobile, said: “Our team has always been drawn to racing games, and Nitro Jump Racing was a perfect opportunity to explore the genre, while flexing our creative muscles. After initial tests were positive, our talented 3D artists and designers were able to bring the toy RC car world of the game to life. We’re extremely excited for players to sample the many improvements that we and Miniclip have added to the game and look forward to growing the Nitro Jump community.”

Byss mobile, founded during 2009 and starting life developing apps, launched a gaming studio in 2017 located in Szczecin, Poland. Starting as a team of 5, the studio has now grown to 50 people.

“We immediately recognised the great inherent quality of Nitro Jump Racing, which perfectly fit within our portfolio of fun and accessible titles. With Byss Mobile’s imaginative take on the racing genre, we are happy to provide our experience as a leader in sports and multiplayer titles on mobile to help it reach the next level of success. Byss Mobile will help us drive forward with our vision in unleashing the gamer in everyone.” added Saad Choudri, Chief Strategy Officer at Miniclip.

Nitro Jump will see continual updates in the future, including a wide variety of skins, cars and rewarding live events for players.

The biggest betting event in Latin America was present at the biggest global event...

Spintec Welcomes Goran Sovilj and Eric Versleeuwen to the Team