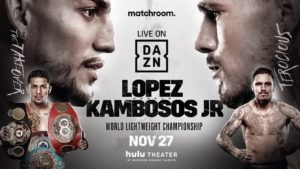 In conjunction with Matchroom, Bookies.com has announced their partnership of the New York clash as World Champion Teofimo Lopez defends his Lightweight title.
Bookies.com has joined Matchroom as an official partner for the Lightweight thriller between unified World Champion Teofimo Lopez and IBF mandatory challenger George Kambosos Jr. at Hulu Theater at Madison Square Garden in New York on Saturday November 27, live worldwide on DAZN.
Lopez (16-0 12 KOs) heads to the Big Apple to make his first defense of the titles he won in stunning fashion with victory over Ukrainian superstar Vasiliy Lomachenko in October 2020, and the 24 year old Brooklyn star will fight at the storied New York home of boxing for the seventh time in his career as he looks to solidify his place in the pound-for-pound list.
Kambosos Jr. (19-0 10 KOs) looks to stun the world and will hold no fear as a feisty Australian challenger, who landed the title shot by beating former World ruler Lee Selby in a final eliminator in London, England, in October 2020 – a sixth straight fight on the road for the 28-year-old.
With the build-up for this long-awaited clash, Bookies.com will be in the thick of the action in New York to bring fans all the exclusive content with fighters and pundits as the matchup draws closer. Fans need to keep their eyes peeled to Bookies.com’s social media channels @bookieusa on Instagram and @bookies on Twitter.
“Bookies.com will be the go-to source for bettors searching for meaningful stats, unique commentary and expert picks. Ahead of the event, Bookies.com will be hosting social media contests offering event tickets and signed boxing gloves. Bettors can follow Bookies.com social media for exclusive pre-show interviews with the fighters and real-time updates,” said Max Bichsel, VP of US Business for Gambling.com Group, which operates Bookies.com.
“Boxing has long been synonymous with betting, and we expect the November 27th Lopez vs. Kambosos Jr. fight to continue boxing’s return to the mainstream spotlight,” said Bichsel. “Bookies.com is excited to partner with Matchroom to help make this fight something to remember.”
“The anticipation is going to reach fever point as we hit Thanksgiving and they meet in New York in fight week, and Bookies.com will be there to give fight fans the inside track on what promises to be an all-out war at the Manhattan mecca of boxing,” said Chairman of Matchroom Sport and the fight promoter Eddie Hearn.

“This summer will prove to be one to remember”: Exclusive interview with R Franco...