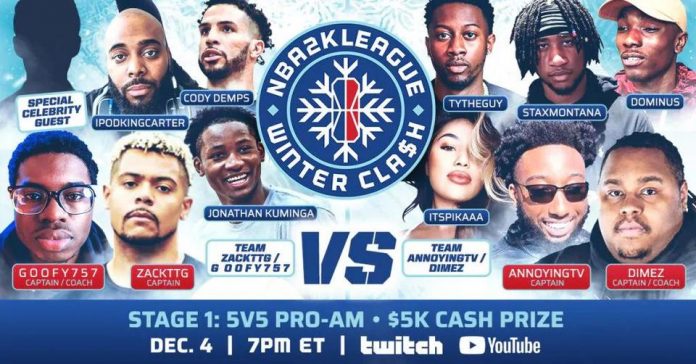 THE CLA$H FOR CASH: Beginning tonight at 7 p.m. ET and running through Friday, Dec. 18, the NBA 2K League will host its first-ever “NBA 2K League Winter Cla$h,” a three-part online tournament featuring NBA G League Ignite players, social media influencers and fan-organized teams, competing alongside and against NBA 2K League players for a share of a $35,000 prize pool. Matches will be played in a best-of-three format and livestreamed on the league’s Twitch and YouTube channels.

KRYPTO KRINGLE: Miami’s own KRYPTO9095 is one of the biggest personalities on YouTube and will be competing in the first two stages of the tournament. A professional gamer and music artist, KRYPTO9095 has released five singles including “Woah (feat. D3Mstreet),” which has more than 127 million views on YouTube and is often credited with popularizing the dance move.

HOLLYWOOD HOLIDAY: In just three years, Los Angeles-native Carrington “Dominus” Bennett has racked up more than 274,000 followers on YouTube. Coming from a family of actors and filmmakers, Bennett often brings his thespian talents to sports gaming to create unique content and moments.

POINSETTIA PIKA: Born in Fiji, Dipika “ItsPikaaa” Dutt moved to the United States when she was five years old. ItsPikaaa has become a popular figure on Tik Tok where she has amassed more than 5.7 million likes. Fun fact: Dutt’s favorite food is chicken wings.

NBA G LEAGUE IGNITE REPRESENTS: NBA G League Ignite’s Jonathan Kuminga and Cody Demps will also be competing in the Winter Cla$h. Kuminga, a native of the Democratic Republic of the Congo, was ranked the No. 4 high-school player in the 2020 ESPN 100. An experienced point guard, Demps played in 40 games for the Stockton Kings during the 2019-20 NBA G League season and averaged 14.4 points along with 5.4 rebounds. NBA G League Ignite recently began training with head coach Brian Shaw in Walnut Creek, Calif.

WINTER WONDERLAND: During the tournament, teams comprised of influencers, NBA G League Ignite players and NBA 2K League players will accumulate points for two designated captain duos – Artreyo “Dimez” Boyd (Mavs Gaming) and ZackTTG vs. Dayvon “G O O F Y 7 5 7” Curry (Blazer5 Gaming) and AnnoyingTV. Among the influencers competing is IpodKingCarter (right), who is participating in his fourth NBA 2K League event. He previously competed in the 2018 and 2019 NBA 2K League Showcase, and the NBA 2K League Three for All Showdown this past March. A full list of the participating influencers is available here. The teams will be vying for a prize pool of $35,000 with $16,000 up for grabs in the main brackets of the tournament’s second stage. Details about the prize pool can be found on NBA2KLeague.com.

Way Out Ways Activates the Winning Winter Spark in FoxFire