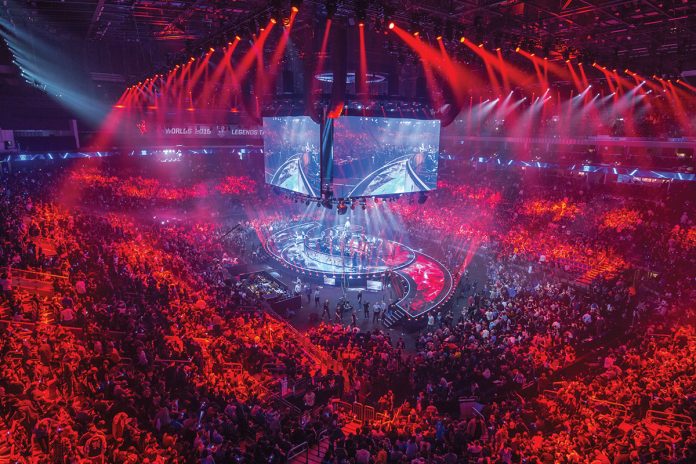 Gambling on – and around – esports is a much bigger market than many assume.

The market can basically be divided by product and then by currency. Let’s start by talking a bit about the currencies that underpin gambling on esports.

For esports gamblers, the currency choice comes down to a decision between cash and skins (virtual items from video games).

Skins require a bit more explanation. Skins are virtual items that can be used in games like Counter-Strike: Global Offensive (CS:GO). The term “skin” is derived from the typical function of these virtual items: changing the appearance of a player’s in-game avatar, weapons, or equipment.

While a number of games employ some sort of skin system, CS:GO skins are the dominant currency in the skin betting market, accounting for over 80 percent of total wagering activity.

For example: Below is an image of the “stock” knife used as a weapon in CS:GO. Players can opt to replace that stock knife with unique skins of the knife that change the appearance of the knife, as shown in the images to the right of the stock knife.

Note that the skins do not improve the functionality or power of the knife. The skin only changes the appearance of the knife. Skins play a purely cosmetic role.

CS:GO skins can be easily transferred between players (the same is not true for all games). That condition allows skins to act as a quasi-currency – something like a casino chip. Given that ability to move skins between players, layering a gambling site on top of that ability is a relatively easy task.

Here’s how it works:

Once players have skins in their Steam account, they can:

Right now, skin gambling is far more popular than cash betting, but a crackdown on skin gambling activity by CS:GO publisher Valve could fundamentally undermine the ability of skin gambling sites to operate.

While markedly smaller than sports betting on esports matches, there is nonetheless a demand for fantasy esports.

Most of the sites serving this space deal in cash betting. The major players are just who you’d expect when thinking about daily fantasy sports, visit Esportsbetting.gg to know more

The basics of daily fantasy eSports

Fantasy eSports sites offer some variant of the “salary cap” model, in which users select a roster of players for their fantasy team under the restrictions of a salary cap set by the site. After picking a team, the eSports competitors score fantasy points for users based on their performances in competition. The users that end a contest with the most fantasy points win cash prizes.

A handful of casino-style games (including roulette, blackjack, and raffles) make up the majority of the remaining interest in gambling among esports fans.

Square in the Air hired by Jockey Club of Saudi Arabia to promote world’s...

Stakelogic to take the Dutch market by storm after having its games available at...

THE COUNTDOWN FOR ZITRO EXPERIENCE MEXICO HAS BEGUN!