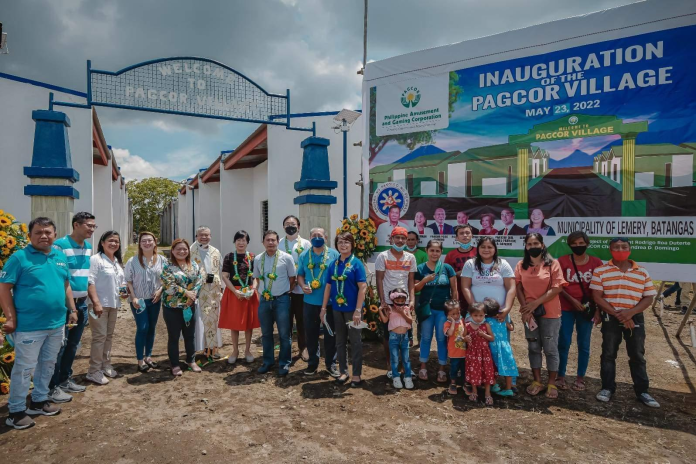 A year after commencing its construction, the Philippine Amusement and Gaming Corporation (PAGCOR) formally inaugurated on May 23, 2022 the first PAGCOR Village to be completed in Batangas province.

The housing project worth P30 million was funded by the state-run gaming firm to provide safe housing for indigent families who were displaced by the eruption of Taal Volcano in January 2020.

Lemery was one of the municipalities in Batangas which received PAGCOR funding for construction of permanent shelters outside of permanent danger zones, as declared by the Philippine Volcanology and Seismology.

PAGCOR Chairman and CEO Andrea Domingo, who led the inauguration of the PAGCOR Village in Lemery, underscored PAGCOR’s role in nation-building, especially in areas that need its help the most.

“PAGCOR, as a government entity was not only created to operate and regulate games of chance but to also ensure that the revenues from regulated gaming is channeled back to our country’s coffers and other vital programs of the government,” she said.

“This PAGCOR Village is just one of our many CSR programs, whose major aim is to give Filipinos a better life, in your case, a safe haven from the possible hazards caused by the Taal Volcano eruption,” Domingo added.