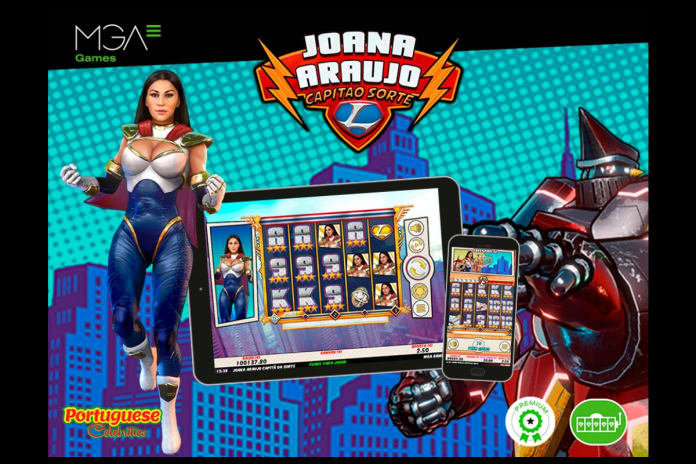 MGA Games, specialists in the production of localised slot games for global operators, has just presented its latest casino slot game, Joana Araujo Capitao Sorte to Portuguese market operators -an entertainment proposal that is out of this world!

The new 5-reel slot game stars a well-known superheroine, actress and influencer Joana Araujo, who must save the world from devastation, and its engaging comic-book-style graphics immerse players in an incredible world of supernatural powers. This fantastic new Portuguese Celebrities from MGA Games entails an important visual change with a combination of a realistic and comic-style aesthetic.

Once again, MGA Games brings its productions to the world with its localized content. On this occasion, MGA Games has chosen the Portuguese actress and influencer Joana Araujo to star in its Captain Lucky (Capitao Sorte) slot game that launched for the international market less than a month ago. The game has been specially adapted for the Portuguese market, using the image and voice of a character that players easily recognise. The result is a fully immersive game for players in a world full of adventure and excitement.

In the main game, Joana Araujo Capitao Sorte prepares for battle with themed symbols, such as power devices, shields, and robots. The Wild feature is also activated when playing in this screen, and when 3 or more of these special symbols appear, the Free Spins are triggered and players can win up to 20 Free Spins.

A new feature in each game, users play with at least two identical reels, which gives them more chances to win and get up to a maximum of 5 identical reels. The game also includes bonus symbols, and when players get 3 or more of these symbols, they can access the mini-game selection screen. Players have to enter the selection screen several times to unlock the mini-games, one after the other, and once two or more are unlocked, the player can decide which mini-game to play.

This new production includes a total of 3 mini-games. The first “Heroine at Risk” features a roulette wheel with 8 possible prizes, where players have to activate the power device and stop the wheel when they want to win a prize. In the “Unexpected Attack” mini-game, Joana Araujo Capitao Sorte must defeat the robots to get a prize. And finally, the third mini-game is “Star Guardian”, where the super-heroine must defeat a cyborg until the exit sign appears. All the mini-games have a maximum prize of 196 x the bet placed.

The new 5-reel premium slot game is available from November 28th for MGA Games’ online casino partners operating in Portuguese market. In addition, on the same day, Dama Fortuna, the localised version of the slot with locutions and texts adapted to the Colombian public, is launched for Colombia.

EGT and E-Systems GmbH increase their footprint in Liechtenstein

Pikachu and Mario lead the way for most tattooed game characters