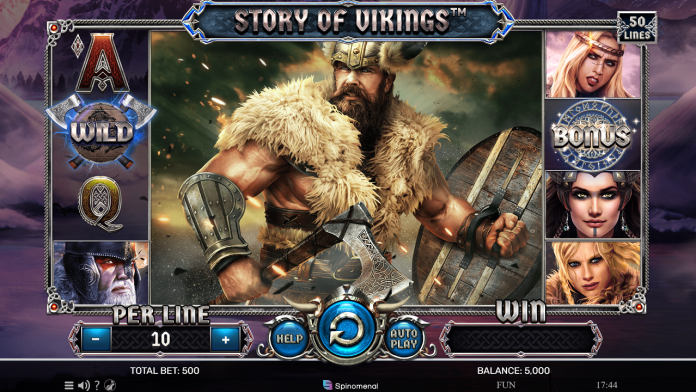 Story of Vikings transports players into a world dominated by seafaring Norse legends where they are challenged to discover a golden haul of prizes. An array of Viking heroes make up the majority of characters on the slick 6-reel design that also features Colossal symbols.

The title’s Power Spin feature plays a vital role in this Viking epic and will remove the lowest symbols from the reel for the round in play. There are three Power Spin levels and the higher the level, the more symbols are taken to boost winning chances.

Synced Reels builds anticipation by linking either the centre two, three or four reels for a round – based on the game level.

Two beautiful carved Viking shields will help players reach the promised land of Free Spins. 10 Free Spins are instantly awarded and then players have an opportunity to add to their haul by spinning to land a range of extra multipliers, synced reels and Power Spins. With enough credits, players can keep adding further elements before setting sail into the feature.

Spinomenal’s CTO, Omer Henya, commented: “Story of Vikings takes players into a Norse Kingdom where they join the Viking people on a trek for legendary riches. Players are ordained with the power to conquer their future thanks to the game’s multiple in-game features.”