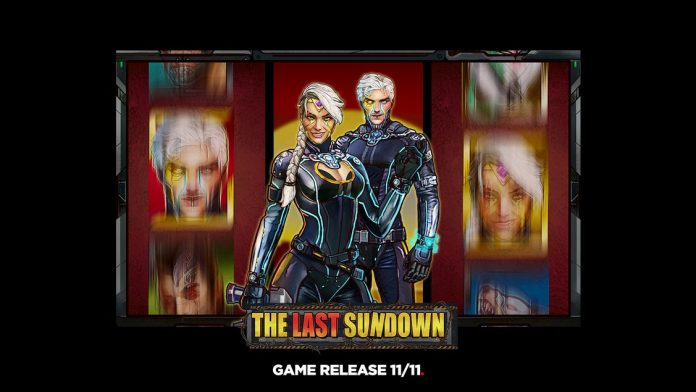 Play’n GO explore a darker theme for their players with their latest Dynamic Payways title, The Last Sundown.

It’s the end of the world. Literally. Earth has become a wasteland and the fight to survive becomes increasingly tricky as resources are controlled by vicious warlords Tuco and Lauro. Two resilient siblings, Rae and Devin, hatch a plan to overthrow them and reclaim resources in an attempt to hold off The Last Sundown.

Featuring Dynamic Payways, this game is all about edge-of-your-seat entertainment. The base game starts with 243 ways to win; with the activation of splitting symbols players’ potential is increased to 59,049 ways to win.

The Wild and Scatter symbols act as plot devices for the story. The Wild represents the treasure that Rae and Devin wish to redistribute among society. While the Scatter represents a health pack to help aid the sick. Other symbols depict the character’s weapons. Each with a futuristic meet makeshift aesthetic – think Mad Max.

Play’n GO’s designers paint an epic picture of an apocalyptic world. There are visual cues as to who the protagonists and antagonists are with a clever use of colour and character features. Where Rae and Devin feature bright hues, the warlords have hints of red and darker backgrounds for a nod to their evil nature.

“The inspiration for this game is from the ever-present problems that climate change presents and how society would have to deal with extreme weather conditions. The contrast of the scorching daytime heat to the freezing nights.

“This is our first game that focuses on a dystopian world; we wanted to create a game with really gritty characters that players could get excited about. We see Rae and Devin as the end of the world’s answer to Robin Hood.”