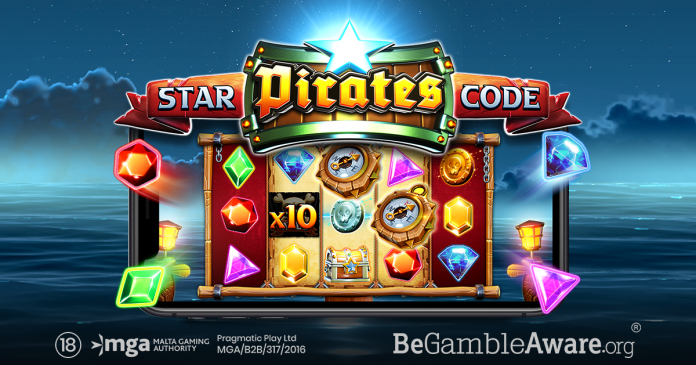 Pragmatic Play, a leading content provider to the iGaming industry, is calling for players to walk the plank in its riveting pirate-inspired release, Star Pirates Code.

Here, players will need to rely on their navigation skills to find their way to a bounty full of gold, and thanks to the skull multipliers, will also be able to unlock a treasure trove of wins and big prizes along the way!

The base game is played out in a coastal environment with waves crashing and lanterns glowing behind the reels. The four low-paying symbols are represented by purple, green, red and blue coloured gems, with premium symbols arriving in the form of treasure chests, silver and gold coins.

The Compass Wild feature is a mechanic that populates reels in one random direction with Wilds, and whenever a compass symbol lands, the re-Spin feature is triggered, awarding players 1 re-spin.

Multiplier values on Wilds are applied to each win that they are part of, and when no Wilds are landed, the re-spins feature session ends, returning players to the base game.

The mechanics in Star Pirates Code mean it should be easy to understand for various player types, making it a game with mass market appeal. The action becomes compelling during the re-spin feature and the graphics shown during a winning combination are highly engaging to players.

Julian Jarvis, Chief Executive Officer at Pragmatic Play, said: “We are very satisfied with how Star Pirates Codehas materialised, bringing an exciting new theme together with our time-tested mechanics.

“We’re eager to see how our audiences receive the pirate-themed adventure, made all the more sweet by the incredible prizes that are on offer.”