Home Canada Retired NBA All-Star Charles Oakley Will Chef It Up for the Skid... 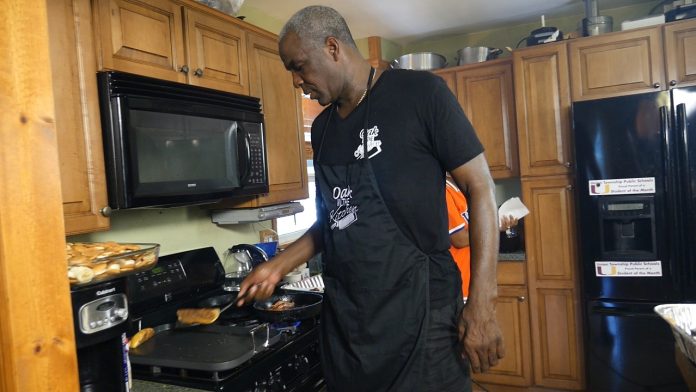 Former NBA All-Star Charles Oakley’s “Oak Out Hunger” community project kicked off in Los Angeles with the goal of providing food and education to underprivileged communities and raising awareness about the need for socially responsible sports betting.

A coalition of nonprofits – The Los Angeles Community Action Network, Help Give Care Foundation, The Charles Oakley Foundation, and the Entain Foundation US – will supply food, fun and fandom to football championship fans on Sunday, February 13th at Gladys Park.

Oakley has worked hand-in-hand with Los Angeles-based nonprofits for many years. A lifelong home cook who is known to whip up a giant family meal, Oak has spent much of his post-NBA career bringing his culinary prowess to homeless shelters and veterans’ organizations nationwide.

“I come to Skid Row every year because of the community,” said Oakley, whose memoir “The Last Enforcer” debuted earlier this month. “It’s a community like no other. And these organizations we’re working with are second-to-none. As the world focuses on the The Big Game, let’s not lose sight of struggling folks right here on our backyard.”

In 2020, the Charles Oakley Foundation launched the Oak Out Hunger campaign, which has provided thousands of meals and other social services to impoverished families in many major American cities.

The Help, Care, Give Foundation, and founders Henry Butler along with his wife casting director Leah Daniels-Butler, supported the efforts of the Charles Oakley Foundation to feed the homeless on Skid Row from the outset and continue to encourage the entertainment industry to lend time, talent and financial resources to feed, clothe and shelter those most in need.

“The Big Game is a global event happening in our city, everyone should have the opportunity to experience it,” says Butler. “We thank the Charles Oakley Foundation for the unceasing commitment to raising awareness of homelessness, and issues impacting the underserved.”

With all eyes on Los Angeles this weekend, Pete White, Founder & Executive Director of the Los Angeles Community Action Network, said it’s important to remember that everyday people are struggling right beside the action-packed spectacle of The Big Game.

“As the country prepares for The Big Game, far less attention will be given to Angelenos, unable to afford Sofi Stadium tickets, unable to afford the rent, and residing in Skid Row,” White said. “What better way to showcase what many would rather hide than food, celebration, and the opportunity to give back.”

“We’re asking folks to Bet Smart and Give Back,” Oakley said. “My Wager Score