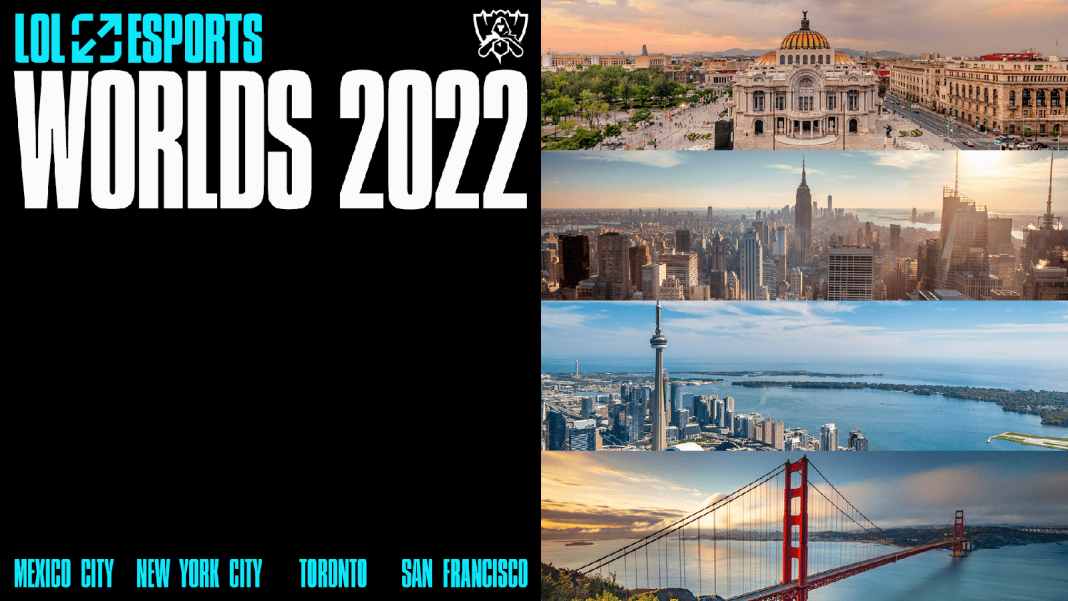 Riot Games announced that its premier esports event, the League of Legends World Championship, returns to North America for the first time since 2016 with a continental tour.

The Worlds 2022 event will feature:

This will be the first time Riot Games has hosted a multinational North American Worlds, making first-time stops in both Mexico and Canada.

The announcement was made at a press conference at Chase Center prior to the Golden State Warriors vs. Toronto Raptors NBA game featuring teams from the semifinal city (Toronto) and final city (San Francisco). Participants outlined Riot’s plan to “canvas North America,” with the final two stops being Scotiabank Arena, home of the Toronto Raptors, and Chase Center, home of the six-time NBA Champion Golden State Warriors.

The Worlds 2022 venue lineup also includes Play-Ins from LoL Esports’ Liga Latinoamerica (LLA) competition arena before contesting both Groups and the Quarterfinals at the Hulu Theater at Madison Square Garden.

“The momentum behind League of Legends Esports has only continued to grow since the last time we hosted Worlds in the U.S. in 2016. We’re thrilled to bring the full scale of our global sport back to North America, and, COVID permitting, welcome fans into the stands across three countries and four different cities,” said Naz Aletaha, Global Head of LoL Esports.

“Worlds is the showcase of the greatest of our sport, and we look forward to celebrating that with our fans in North America and across the world.”

Chase Center, also home of the Golden Guardians, a team in LoL Esports’ North American league (LCS), opened its doors in 2019. It is an award-winning sports and entertainment arena that boasts a seating capacity of 18,064. In addition to Warriors’ home games, the venue also hosts a variety of concerts, conventions, and other large-scale events.

Chase Center will be the 10th unique arena to host a Worlds Final. The most recent Worlds Finals venues and locations include the Laugardalshöll Sport Center in Reykjavík, Iceland (2021); SAIC Motor Pudong Arena in China (2020); AccorHotels Arena in Paris, France (2019); Incheon Munhak Stadium in Incheon, South Korea (2018); Beijing National Stadium in Beijing, China (2017); and the Staples Center in Los Angeles (2016).

Sunday’s announcement prior to the Warriors vs. Raptors game featured Riot’s senior most esports executives alongside top casters and LoL Esports players:

Worlds is the pinnacle of LoL Esports competition in which the top teams from 12 diverse regions compete for the world champion title. Held at the end of the regular season in a different host region each year, 24 teams from Riot’s 12 professional leagues participate in the month-long tournament to crown one team as the best in the world. The 2020 World Championship shattered previous viewership records with more than 45.95 million peak concurrent viewers worldwide and an average minute audience (AMA) of more than 23.04 million.

Kindred expands US footprint with deals in Ohio and Illinois