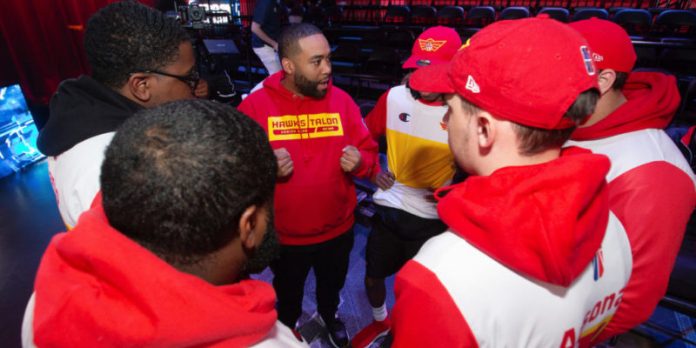 Hawks Talon GC, the official NBA 2K League affiliate of the Atlanta Hawks, today announced that they have protected Caesar Martinez (CEEZ) and Michael Swanegan (SWANN) from the upcoming NBA 2K League Expansion Draft, set to take place on Nov. 17. This offseason, each of the 23 teams that competed in 2021 must protect at least two and up to three players who were on its roster at the end of the 2021 season from selection in the expansion draft. All protected players are ineligible to be selected in the expansion draft.

“With the approaching expansion draft, I wanted to be confident that our team maintained a necessary drive to win,” said Hawks Talon GC Director of Esports Wesley Acuff. “CEEZ and SWANN brought invaluable leadership and a hunger to win to our franchise last season, and we look forward to building around them this offseason.”

CEEZ, Hawks Talon’s 2021 first-round draft pick, returns to Hawks Talon GC after finishing the 2021 regular season ranked eighth in average points per game (27.0). In addition, he ranked 21st in the league with 7.5 assists per game while playing primarily as the team’s point guard. SWANN, Hawks Talon’s 2021 third-round draft pick, will return next season after playing multiple roles and compiling season averages of 6.4 points, 1.2 steals and 0.9 rebounds per game.

During the expansion draft, held on Nov. 17, DUX Gaming’s team will select two or three players to become the team’s first players. During the month following the expansion draft, each of the 23 teams that competed in 2021 will have the opportunity to retain additional players. Teams will retain players by forfeiting draft picks in the 2022 Draft. Subject to NBA 2K League rules and satisfaction of all applicable requirements, all players who are not retained will be automatically eligible for the 2022 Draft.