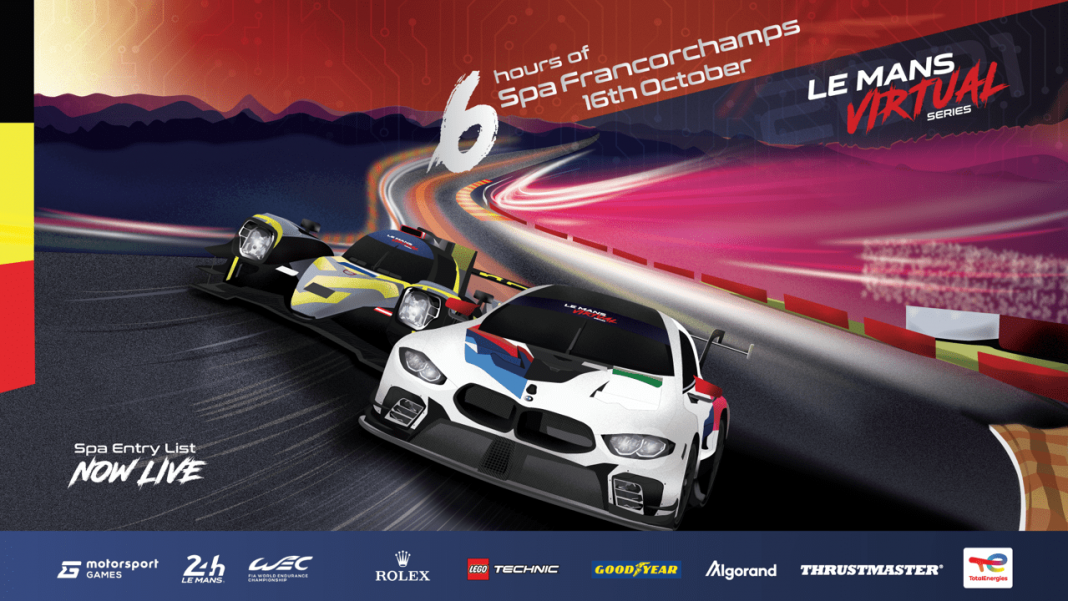 The second round of the Le Mans Virtual Series is fast approaching and the 38-strong, star-studded entry list for the 6 Hours of Spa Virtual on Saturday, October 16 has been revealed.

Whether in real life or in the virtual world, any race held at Spa is an event which never fails to deliver excitement, tension and drama. The 7km track always provides incidents and plenty of action, and the combined skills of the racing pros and sim experts will be fully put to the test on the rFactor2 platform’s excellent portrayal of the legendary circuit. Among the features which can be put into play by the event organisers are dynamic weather and, as unpredictable conditions at Spa are extremely common, this may well shake things up even further.

Leading the battle among the 21 LMP2 prototype entries will be Monza winners, Realteam Hydrogen Redline, with Jeffrey Rietveld and Michal Smidl being joined for this round in the No.70 by FIA F3 star Caio Collet as Dani Juncadella has prior racing commitments.

With the IndyCar season now over, ex F1 driver Felix Rosenqvist joins the series in the No.123 entry, as does recently crowned FIA F3 Vice Champion Jack Doohan in the No.11 Red Bull Racing Esports ORECA 07 LMP2. Both will be relying heavily on the talents and experience of the sim stars (Atze Kerkhof/Bono Huis in #123 and Alex Siebel/Dennis Nordan in #11) in their entries as they get to grips with the Le Mans Virtual Series.

After four hours of intense racing in the opening Italian round, a scant 2 seconds separated the No.22 GPX Williams Esports and No.4 Floyd ByKolles-Burst cars and both will be looking to maintain their good form – the experienced sportscar racer Tom Dillman replacing Sergio Sette Camara in the No.4 for this round.

No fewer than five manufacturers (Ferrari, Porsche, BMW, Corvette and Aston Martin) have entries in LMGTE and Porsche will be hoping for a repeat of their Monza success. The No.91 Porsche Esports Team 911 RSR GTE retains the winning line up of Mitchell deJong, Mack Bakkum and Martin Krönke, as does the No.71 BMW Team Redline of sim star turned pro racer, Rudy van Buren, Enzo Bonito and Kevin Siggy which took a close second and will be looking for a step up on the virtual podium.

Indy 500 and IndyCar hotshot Sage Karam makes his Le Mans Virtual Series debut with Porsche Esports Team, as does Ryan Cullen in the No.87 GR Wolves Racing Porsche and current ADAC F4 champion Jonny Edgar who will be racing the No.111 Corvette C8.R for Red Bull Racing Esports.

The Le Mans Virtual Series brings together top level real life drivers and some of the world’s best sim racers to compete together in 5 endurance races of between 4 hours and 24 hours in duration and concludes with the 24 Hours of Le Mans Virtual which will take place live at the Autosport International show in Birmingham, UK in January 2022.

You Have 30 Days to Win a Lamborghini at FreeBitco.in