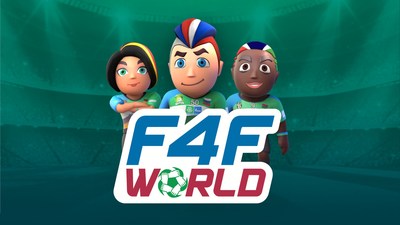 The Open Draw was held in an online ceremony on 25th April, the International Day of Football and Friendship. The Young Ambassadors for the project, Ananya Kamboj from India, Yusuf Moazzam from Pakistan, Sheqayli Ascencion from Aruba and Alinur Gabidenuiy from Kazakhstan, drew the 32 International Teams of Friendship. The teams were organised into a total of eight groups, with each group consisting of four teams. All teams are named after endangered species to draw attention to the problem of animal extinction. Watch the Open Draw on the programme’s YouTube: https://www.youtube.com/watch?v=1WtKefJnfas.

The eF4F is held on the multiplayer simulator Football for Friendship World (F4F World), which was specially developed for F4F, but available for free on MS Windows, Apple macOS, Android, iOS. Each team consists of six players, and a match runs for two halves of 3.5 minutes each. Football academies all over the world can nominate boys and girls aged 12 to 14 as players up to 1st May.

The preliminary rounds of the eF4F 2021 tournament will take place on 27th and 28th May. The final will be played on 29th May. The national F4F Ambassadors will meet for the National Ambassadors Forum in Istanbul on 29th May on the occasion of the UEFA Champions League final. At the Forum, they will discuss the development of children’s football.

Ivan Galayev, Young Player from Latvia, 12 y.o.: Dear participants at the events of F4F 2021, welcome to the world of nine values. It was a great pleasure and a great honour for me to take part in the Football for Friendship eWorld Championship in 2020. It’s the perfect place to experience friendship, peace and enthusiasm for the game of football. I wish you good luck and lots of fun in the 2021 games. Enjoy yourselves!

Muhammad Y Jallow, Young Player from Gambia, 14 y.o.: When my father first recommended that I take part in F4F, I didn’t really understand what it all meant. But when I started to look for more information, I understood that it’s about much more than a game. In fact, its key ideas are: 1. Fair play, 2. Football should not create disharmony but forge friendships. 3. The best way to play football is to train regularly. I train really hard. When I started playing football, all my teammates were at least three times better. I started working hard on myself until I got into the first team and even became the best player in the team. I have learnt never to give up. It was like a dream come true when I found out that I can take part in this fantastic project. Thank you for everything.