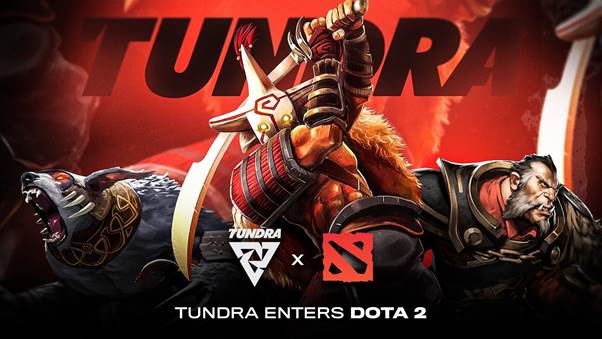 Tundra, a London based esports organisation known for their international roster of the world’s best FIFA players is pleased to reveal their expansion into Dota 2 with the acquisition of Mudgolems, a new and upcoming European team. The team is led by Adrian “Fata” Trinks, a veteran of the Dota2 scene. Having started his professional career more than 8 years ago, Fata played under some of the biggest teams in Dota2, including Team Liquid, Cloud9 and Team Secret. In those years, he managed to participate in all Internationals and various Major Valve Tournaments. More recently, he switched to the hard support role, using his experience to create and captain his own team.

Tundra launched in 2019 with a world-renowned international FIFA roster and the ambition to house high profile talent with their eye on victory at every event they attend. Following a successful first year with the signing of TikTok as Principal Partner and Kappa as the Official Sportive Teamwear provider. Tundra will now expand into Dota 2 with the signing of Mudgolems who recently qualified for the EU Upper Division in DreamLeague Season 14. Performing extremely well and showing promising potential, it was the Mudgolems´ rapid rise to success that ultimately sparked Tundra´s interest in supporting the team.

“Signing a new roster in a new game is a significant investment for any esports organisation and not an overnight decision. Dota 2 continues to be a pinnacle esport and Mudgolems is a new team that is already making a name for itself and who share the same ambitions and passion as we do,” said Maxim Demin, owner of Tundra. “The potential is sky high and we believe Fata will be able to steer the team in the right direction and challenge some of the biggest names on the Dota 2 esports scene. At Tundra we want to compete at the highest level and in the world’s biggest esports, which is why we believe an expansion into Dota 2 is a natural step for us. With that being said, we realise that success doesn’t come overnight either.”

“Tundra Esports and I share the same drive to build a force within the Dota2 Esport scene and I believe this will let me take the team to the next level,” said Adrian “Fata” Trinks, Team Captain of Tundra’s Dota 2 team.

Adrian “Fata” Trinks has a strong roster of players supporting him, including:

Tundra fans can watch the official debut of the new Dota 2 team on Tuesday January 26th at 9pm CET, playing against OG in the DreamLeague Season 14 DPC EU Upper division.

Greentube to reveal Romeo & Juliet – Sealed with a Kiss™ at ICE London...