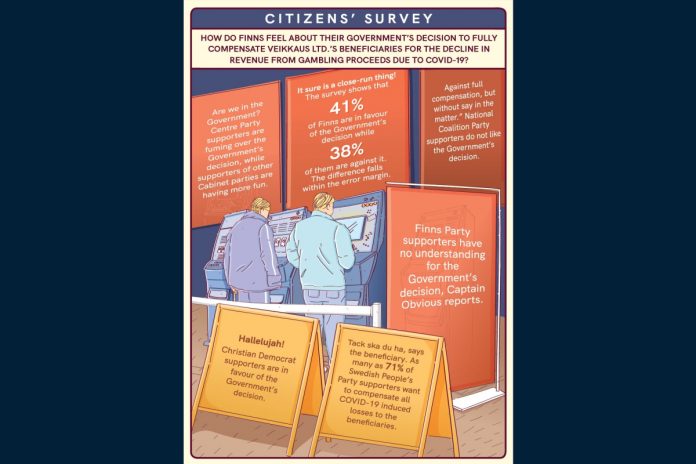 The Finnish Government’s decision to make budget appropriations in order to fully compensate Veikkaus Ltd.’s beneficiaries for the decline in Veikkaus’s revenue from gambling divides the Finnish people into two, almost equal-sized opposing camps, as indicated by the survey commissioned from Bilendi Oy.

Finns are split almost exactly in half over whether or not the Finnish Government reached the right solution in deciding to make budget appropriations to fully compensate Veikkaus Ltd.’s beneficiaries for the decline in Veikkaus’s revenue from gambling in 2020.

In March this year, Veikkaus Ltd, the government-owned betting agency that holds a monopoly in Finland, shut down its gambling machines in grocery stores, convenience stores, restaurants and petrol stations due to the coronavirus crisis. Additionally, sports betting has faced an exceptional situation, as many popular sports have temporarily ceased.

41% of Finns are in favour of the Government’s decision to fully compensate the beneficiaries for the decline in revenue, while 38% of them are against it. The rest cannot say how they feel about it.

These are some of the findings of a survey conducted by the market research company Bilendi Oy as part of its M3 Panel, a nationwide consumer panel, between 10 and 13 July 2020, on commission by Kasino Curt, the gambling information website (https://kasinocurt.com/). The margin of error in the survey is ±3.1 percentage points. A total of 1,000 Finnish adults responded to the survey, and the sample was weighted by age, gender and place of residence to represent the Finnish population on a national scale.

“On the whole, the difference between the support and opposition is so small that it falls within the margin of error. However, different age groups relate very differently to the matter. The 18-24-year-olds feel most negatively about the decision, whereas among the 45-54-year-olds, as many as 47 percent consider the decision a good one,” says Janne Juntunen, Senior Client Service Manager for Bilendi Oy.

Gambling machines in grocery stores: a sign of the post-COVID-19 era?

In June, Veikkaus publicly announced it will restart the gambling machines on 15 July. Veikkaus also announced it will do so with attention to the health risks caused by COVID-19, which seems to have convinced the Finnish people.

According to Kasino Curt’s survey, 46% of Finns approve of Veikkaus’s decision to turn the gambling machines back on while 30% of them disapprove of it. The rest cannot say how they feel about it.

“The coronavirus epidemic was not mentioned in conjunction with the survey for impartiality reasons, but the respondents may have thought that the restart of Veikkaus’s gambling machines is a sign of the post-COVID-19 era,” Juntunen mentions.

Last year, Kasino Curt commissioned two similar surveys from Bilendi. The findings of these surveys indicated that more Finns support than oppose the idea of abolishing Finland’s gambling monopoly and adopting a gambling licence system and that Finns are suspicious of the Finnish MPs’ motives in gambling matters.

The results of all the three surveys are still available online at https://kasinocurt.com.

Listed below are the statements of the most recent survey and those responses that indicated agreement or disagreement with them (that is to say, the responses “Cannot say” are not included in the listing):

500.com Limited Announces Changes to Board of Directors and Management

Skywind Group is now a member of Slotegrator’s partner network