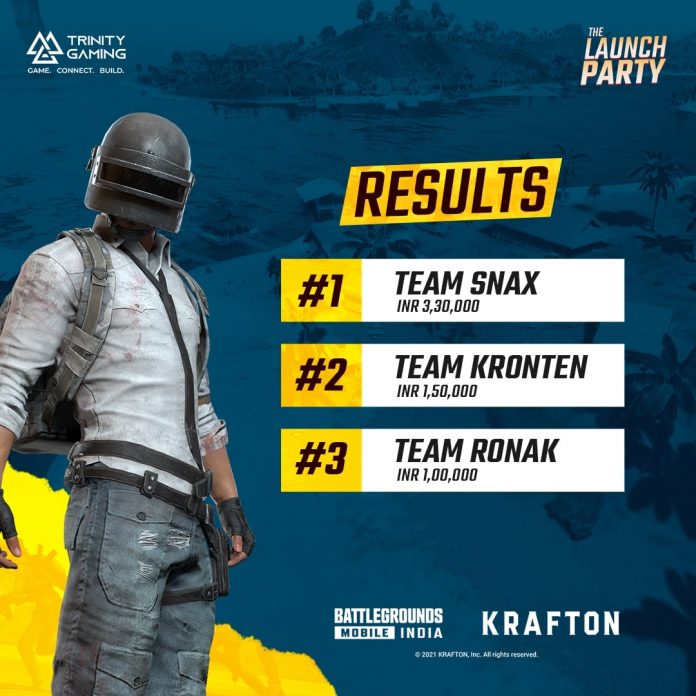 With the much-anticipated and successful Esports title launch of Battlegrounds Mobile India (BGMI) in the Indian market, the launch party of the exclusive Indian game surprised all with the total number of views going past the 25-million mark throughout the entirety of the launch party across all platforms. Country’s eighteen prominent gamers, content creators and known personalities in the world of Esports came up with their exclusive squad and became the part of this virtual launch party which was held on July 8-9, 2021.

While accumulating the numbers, 97,19,493 and 79,14,400 views came on the first and second day respectively across Hindi and English language on BGMI’s official YouTube channel, the engagement throughout the launch party proved the potential of the game as well as it lived up to the hype created in the whole Esports and gaming community.

The tournament, which boasted a whopping prize pool of INR 6,00,000, saw Team Snax emerging as the winners and securing prize money of INR 3,30,000 while Team Kronten and Team Ronak took home INR 1,50,000 and INR 1,00,000 with their second and third-place finish respectively.

Abhishek Aggarwal, Co-Founder and CEO at Trinity Gaming, who manages most of these talents, said, “This launch was a huge step in the space of Esports as it gave the players a new arcade to explore and compete. We are very proud to be associated with Krafton as their Official Talent Partner and initiated the first-ever Battlegrounds Mobile India launch party in the country and the event received more than 25 million views combining official YouTube, Facebook platforms of BGMI and the streaming channel of the content creators who were invited on this launch party. We have witnessed some of the best content creators and gamers battling it out and displaying their skill set with their exclusive squads.”

“The event was quite good as it starts up the spark of competition in a chill way to begin with, honestly this is one of the best starts to a game that wraps up around the emotions and understandings of influencers and the audience” said Ocean Sharma after the conclusion of the launch party.

With the fierce level of competition in the tournament and the amount of fans supporting the launch party, it’s safe to say that the game indeed has a very bright future in India and has the potential to become the country’s favourite game.

It was a crazy run for our team in the first-ever BGMI launch party, we are very thrilled to come out as the winner of the inaugural tournament where we outclassed a lot of top teams from across India. It will be a memorable tournament for us as we succeed to get four chicken dinners in the game. All thanks to Krafton and the whole production team which concluded this first-ever launch party successfully. We are looking forward to the upcoming tournaments of BGMI and our squad is fully prepared for it. Last but not the least, many thanks to viewers to give us an overwhelming response throughout this launch party” said Snax after winning the first prize with his squad.

“The BGMI launch party was a grand success with the Esports community joining the wave of the virtual gaming industry. The main attraction of the launch event was the BGMI tournament and the excitement was over the top I must say. We surely didn’t want to lose this opportunity and my squad took up the challenge, securing the second rank with impressive prize money to celebrate. We are eagerly waiting for the esports roadmap of BGMI where teams across all India can showcase their talent, skills and strategies. A brand new era of gaming has just begun,” said Kronten after coming second in the tournament.

Battlegrounds Mobile India has been receiving an overwhelming response, within a week after its release; the game has surpassed 34 million registered users. The game also recorded the highest of 16 million daily active users and 2.4 million peak concurrent users and this seems to be just the beginning of the rise of popularity of the much-awaited game.