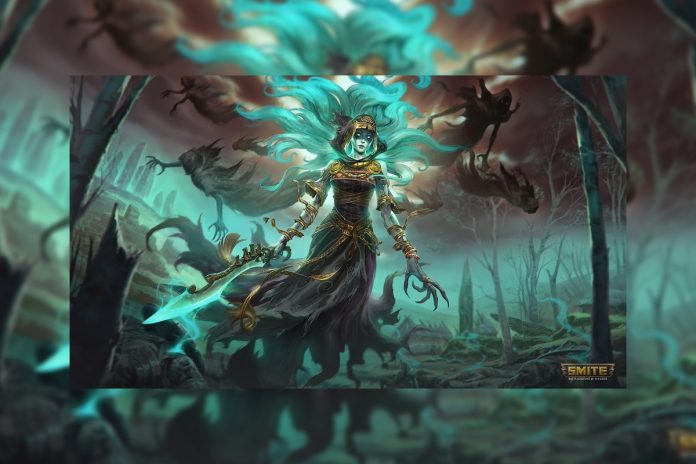 Floating around in tattered rags, her fingers like claws, Cliodhna embodies the ever-dreaded figure of a specter. She brings a horror game feel to SMITE – just in time for the Halloween season. As all SMITE characters, Cliodhna can be unlocked for free just by playing.

With her ghostly form and blood-curdling wails, Cliodhna inspires despair among her enemies. She is said to haunt places where much blood has been shed, so it is no surprise that her lust for fear ultimately drew her to the Battleground of the Gods.

From a design standpoint, Cliodhna is an extremely ambitious Goddess. She can walk through and inside walls, a first in SMITE. From there, she lurks unseen until she lashes out towards her unaware prey in true Assassin fashion.
“When first designing Cliodhna we knew we wanted to bring a horror feeling to the Battleground”, says SMITE

Designer Daniel ‘PonPon’ Cooper. “During brainstorming the idea of her disappearing into a wall and then striking out from inside of it resonated with the team and we knew this would be the main feature that would truly make her a horrific opponent. Entering into a wall had to be smooth, the visuals needed to be clear, and the gameplay intuitive to make this work. Our team invested heavily into this new tech and as a team I believe we nailed it.
Not only do enemies need to fear the walls that surround them but when they face Cliodhna directly their senses may betray them. She is the only Goddess to Deafen enemies—briefly muting all sounds—and to become temporarily invisible only to the prey she is hunting. Beware the jump scare!”

Extensive details on Cliodhna can be found in this Closer Look blog post written by the developers.

Winter Conquest Map
With today’s update comes the new ‘Winter Deadwoods’ Conquest Map, bringing the Battleground of the Gods straight into snow and ice in a scary atmosphere befitting Cliodhna. This new map also introduces a new gameplay feature: Lanterns. They can be destroyed to create a cloud of Mist. Players inside turn invisible to enemies outside.

For the first time in SMITE, as part of the Living Conquest initiative the ongoing Season 8 is being played on a different map of Conquest every quarter, ensuring the action always feels fresh.

The Reaping Event
Gods go bump in the night as the Reaping, SMITE’s yearly Halloween event, is back! Players will be delighted to get six thematic skins including one for free, plus spooky cosmetic items unlocked with quests.

Beast Seer Artio can be unlocked for free through quests, while Halloween Hysteria Baron Samedi is an Exclusive bonus reward obtained after getting three skins. The ultimate collection reward is the Unlimited Screamy Chibi Izanami skin.

A New Crypto for the World from UniPlay. The Digital Currency for Future Decentralised...