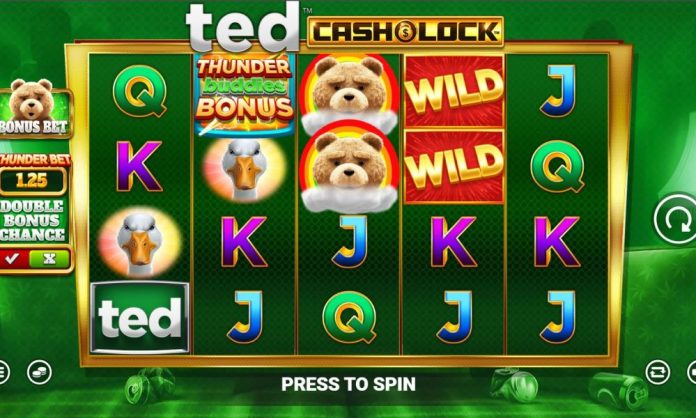 The first ted™ game in the series remains one of the studio’s most popular titles and ted™ Cash Lock, released on December 1st, sees the iconic, lairy star of the films grace the reels with new gameplay, fresh features but the same unmistakable sense of humour.

Psychedelic ted™ sees six or more Psychedelic Rainbow Ted symbols in view during the base game trigger the Free Spins bonus. Every Rainbow Ted that lands in view adds a special Cash Lock™ border to the reel position.

The Cash Lock™ positions can be then upgraded from bronze to silver to gold, increasing their value for the Super Cash Lock™ feature.

It wouldn’t be a ted™ game without the infamous Thunder Buddies! It comes into play during Free Spins where players can win an instant Cashpot or one of three upgraded Free Spins rounds, including Super High Free Spins where every Cash Lock™ symbol that lands in view are guaranteed to be gold.

Jo Purvis, Director of Key Accounts and Marketing UK at Blueprint Gaming, said: “We’re thrilled to have been working on another entry into the hugely popular ted™ franchise and we’ve introduced several new features for fans of the obnoxious bear to have fun with.

“We’ve packed a lot into ted™ Cash Lock – it promises to be a comedic playing experience with some serious win potential – we’re sure it’s going to be a hit among players across the board.”