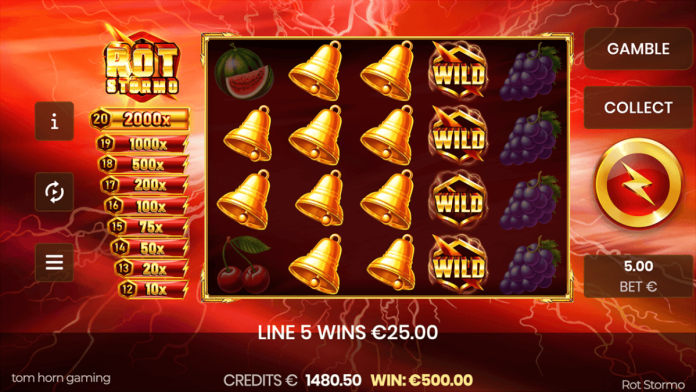 Raging lightning, careless fruit symbols, and sizzling hot wins, and the potential to maximise winnings in the buy feature make Rot Stormo an appealing game not only to those who fall easily for classic fruit slots.

A high volatility slot with 40 winlines played on a game grid of 5×4 uses a hold & win mechanics. The players’ hearts get racing right in the base game, where wild symbols, when landing on reel 2, 3, or 4, cover the whole reel and transform into expanding wild symbols to form more winning combinations.

The bonus buy feature is a nice add-on, taking players directory into the respin mode at 100x their stake.

Tom Horn Gaming is well known for its innovative approach to classic fruit slots – 243 Crystal Fruits or 81 Frutas Grandes being the supplier’s all-time favourite games – where the simplicity of the traditional slot genre, nice game rhythm and pleasantly enhanced features  make for an unforgettable gaming experience.