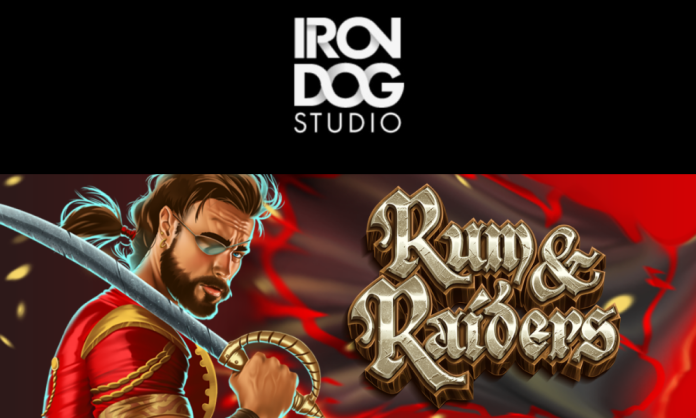 Players are invited to don their pirate hats in Rum & Raiders, the latest Hold and Win release from Iron Dog Studio offering wins up to 25,000x!

With an oversized 5 reel, 4 row base game board, Rum & Raiders comes with a veritable pirate’s booty worth of features. Hunt for the Skull & Bones Scatter symbols, three of which will trigger the feature-packed Hold and Win bonus game.

During Hold and Win, with the now-familiar format of three re-spins that refill each time the player lands another multiplier or character multiplier, the dastardly crew of Pirates are key to scooping those big wins:

Filling a whole reel activates one of two additional bonus reels, one on each side of the board, giving even more space for multipliers to land.

For any player who misses the Hold and Win feature by landing only two scatters, the game’s second feature, Broadside Bonus, is triggered. Targeting an unsuspecting merchant ship, players plunder its loot by blasting its broadside. Broadside spins win players multipliers, ramping up their winnings and can also award further spins in the form of extra cannonballs.

Matt Whittington, Mathematician at 1X2 Network commented: “Evolving upon the ever-growing arsenal of Iron Dog Studio’s Hold and Win games, Rum and Raiders comes aboard with a whole roster of pirates to help you Hold and Win the gold on a re-spin!”

“One new feature I’m excited to see players enjoy is Rum and Raiders’ bonus round: Broadside, where they’ll plunder enemy ships for plenty of loot.”

Rum and Raiders is out for exclusive release on the 9th November and has its general launch across the 1X2 Network on the 16th November.