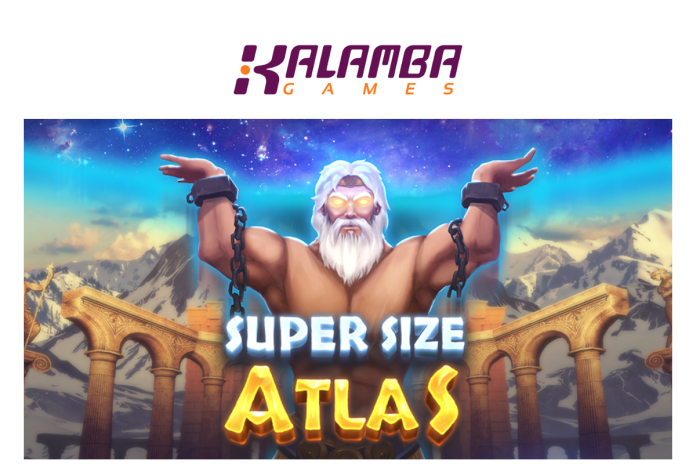 Kalamba Games takes players on a journey through Greek mythology, where expanding wilds and changing winning ways are gifted to the player by a Greek God in the latest slot release Super Size Atlas.

This highly volatile 6×3 slot sees players seeking the mythical Titan’s favour to unlock additional ways and be awarded their much sought-after treasure.

When players hit an expanding Atlas K-Raise symbol, it grows to fill the whole reel vertically and increases the number of playable rows by one. These wilds can be instrumental in unlocking the title’s 50,000x bet max potential win.

Kalamba favourite feature, K-Boost, sees a meter filled for each successive spin played which increases the number of starting free spins awarded. In addition, the classic HyperBonus feature allows players to instantly enter the bonus round with a choice of three different starting options.

Alex Cohen, COO and Co-Founder at Kalamba Games, said: “Innovation and players’ entertainment underpin all the work we do at Kalamba Games and Super Size Atlas delivers and exceeds both of these key goals.

“Our K-Boost feature rewards players regardless of the outcome of each spin by increasing the free spins round potential, whilst K-Raise increases the number of potential winning ways. This great blend of features will keep engagement high throughout play and we look forward to seeing players’ reaction to this super-sized release.”

ABBIATI Exhibits its Products at NIGA 2022

VALORANT tournament Spike Nations returns with €60,000 to be donated to charity by Riot...

XtraWays™ sees players collect counters that increase the size of the reels on the...