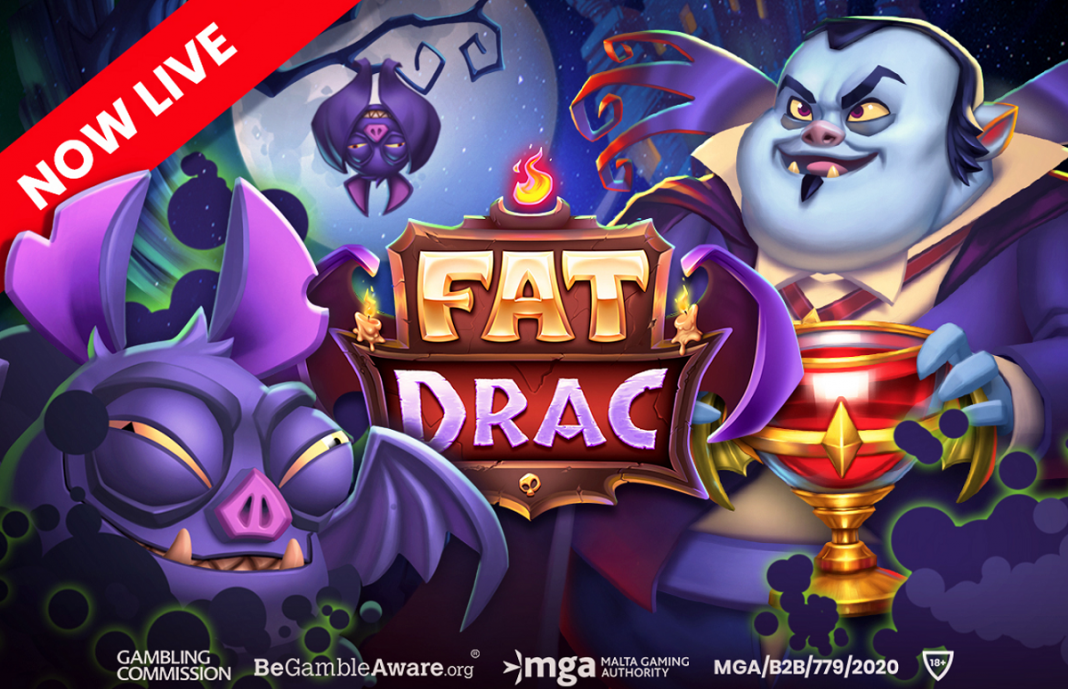 Following Fat Rabbit and Fat Santa, the third in the string of popular titles features the studio’s unique twist on a classic theme, taking players on a visit to a vampire’s mysterious castle in pursuit of spooky successes.

A 5×5 reel set with 40 win lines, play in the base game sees players searching for the Fat Drac symbol, which acts as both a Reveal and a Scatter symbol.

When it lands, it can reveal a paying or a bat symbol, with the latter seeing the bat fly to an instant prize bubble, awarding players with the value attached. If the Fat Drac symbol lands with one or more goblets also present on the reels, the free games round is triggered.

Instant prize bubbles are found in both the base game and free games round and offer multipliers that can reach all the way up to 50,000. A total of seven prize bubbles are shown and nudge by one position with every spin. A Fat Bat symbol can also land at any time, allowing collection of all prize bubbles displayed.

Players must also keep an eye on a meter that follows Drac’s progress as he consumes more goblets with every corresponding symbol. Each time a level increases, free spins are awarded.

Commenting on the release, James Marshall, CEO at Push Gaming said: “We’re looking forward to the latest release in our Fat series. Fat Drac is another game with our typical awesome production values and has an even fatter selection of engaging features!”

In time for Halloween, but relevant any time of year, Fat Drac is full of random rumbles and mischievous bats which add a real depth to the theme and overall gameplay.”

This latest release comes on the back of a hugely successful year for Push Gaming, having picked up honours in the recent Casino Beats Game Developer Awards and also being shortlisted for a further four crowns at the prestigious EGR B2B Awards 2021.

Push Gaming continues to build on the growth momentum gained from 2020’s acquisition of an MGA and UKGC-licensed platform and furthering its expansion ambitions across Europe with several new market entries prepared for the coming months.

Established as one of the industry’s most entertaining suppliers, Push Gaming is live across the majority of Europe’s key regulated markets with the likes of Casumo, LeoVegas, Entain and The Rank Group

ThunderSpin opens the pages of the new Book of Jam slot