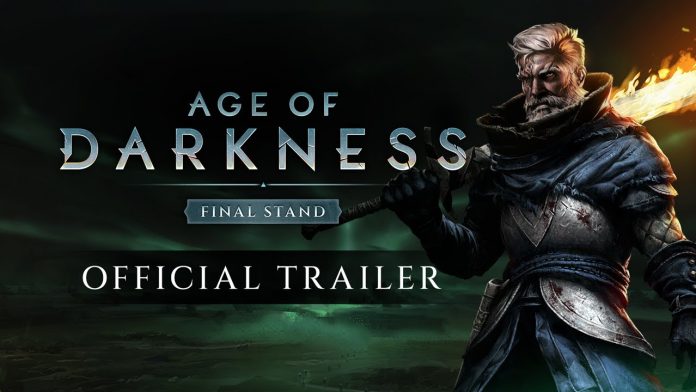 PlaySide Studios have announced their dark fantasy survival RTS Age of Darkness: Final Stand will be descending into Early Access through Steam in Fall 2021. Age of Darkness: Final Stand presents a modern, darker spin on the survival RTS genre that will challenge new players, and strategy experts alike. The initial story driven trailer is now live giving players a sneak peak into the title and unique gameplay.

Strategic construction, careful resource management, and rapid recruitment are the keys to surviving unrelenting swarms of Nightmares. Robust defences to build, battleworn heroes to enlist, and the tug of war between light and dark all complemented with an original soundtrack by Path of Exile composer Kamil Orman-Janowski.

Age of Darkness: Final Stand will enter early access with an intense survival game mode that tests your resolve. By day, construct buildings, gather resources, and recruit an army led by unique Heroes. Scout into the deadly fog of war and take the fight to the horrors within. By night, survive swarms of enemies numbering in the thousands. Made to be highly replayable, your army will fall, your settlements will crumble, but you will learn. Rise from the ashes again and again to push back the darkness of ‘The Veil’ and keep the light alive.

Light up a rich, complex, procedurally generated map to claim territory back from ‘The Veil’. A dynamic living death fog that conceals enemies, drains life from your troops and turns structures into spawning nests for the Nightmares. Holding the line against this terror is not for the faint of heart. Any units unfortunate enough to be too close to ‘The Veil’ become ‘horrified’, sending them into fits of fear and lowering their effectiveness. Only light cures the darkness, so fight in the light or pay the price.

Brace yourself against huge tidal waves of Nightmares. Leveraging an internally developed technology called ‘SwarmTech’ allows the game to render over 70,000 enemy units on the screen at one time. These enemy legions claw their way up through seething fissures in the earth to reinforce ‘The Veil’. When the Death Night begins, you’ll be weakened by a Malice – a random affliction capable of undermining the best laid plans. If you are fortunate enough to survive until dawn you will be rewarded with a choice of Blessings. Live or die, Death Nights will test your strategic skills to breaking point.

Lead the charge against the horrors of the night with powerful and unique Heroes. Using special abilities gained from levelling up, these Heroes can be key to turning the tide of a desperate battle. But beware, the Nightmares have elite roaming champions of their own that drop precious resources when killed, posing an extreme and ever-present threat to your expansion. Are you the hunter, or the hunted?

At PlaySide, we are passionate about working hand in hand with our players to help shape the evolution of Age of Darkness: Final Stand, both during Early Access and into the future. Our strongest desire is to have a title reflective of our gaming passion whilst providing a unique challenge that players from this genre both desire and demand. We look forward to building a long-term community and engaging with our players who share a like-minded vision of making a deeper, darker, challenging combat RTS experience.

“The PC RTS genre is as wild and untamed as it is deep and complex. This is a space where anything goes and the player’s expectations are limitless” said Sean Gabriel, Lead Designer on the title. “Rising to that challenge and bringing PlaySide’s special blend of personality, experience, and talent to bear has been a herculean task of which we’re exceptionally proud. With Age of Darkness: Final Stand we’ve been able to combine our passion for Action RPGs, Roguelikes, and RTS games into something wholly our own – and we’re only just getting started.”

Apollo Global to Invest €500M in SAZKA and KKCG