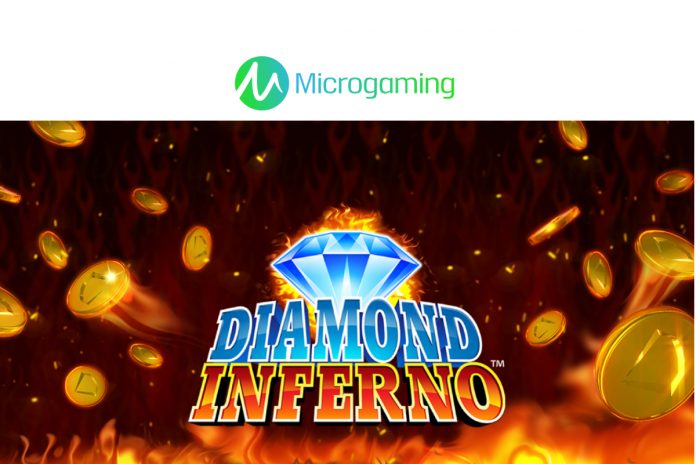 On each win, a free respin is awarded as the play area expands by one row, adding ten additional paylines with each expansion. Diamond Inferno can expand up to an astonishing five-by-six reel grid with 50 paylines. Each win offers the chance for a bigger reel set and even greater win potential.

Once the entire five-by-six reel grid is unlocked, players embark on Diamond Inferno’s epic multiplier trail. A rocking soundtrack sets the reels ablaze as players reach the pinnacle of the inferno with wins multiplied up to 10x.

Filled with classic casino icons, including fiery sevens, golden bars and lucky dice, Diamond Inferno comes packed with diamond scatters. Landing three or more diamond scatter symbols awards players with further wins, all multiplied by the total bet. As the reels open up, so does the chance to land these valuable gems.

Ahead of Diamond Inferno’s network-wide release, Microgaming held its first exclusive operator tournament, providing Betsson Group staff with the opportunity to experience the game and battle it out for a top spot on the Diamond Inferno leaderboard for a chance to win fiery cash prizes. Matthias Wachter, one of the tournament winners, described the game as “very exciting”, adding: “With every spin, I was excited to go all the way up to the multipliers. The Diamond feature is simply awesome, as you can make big wins. Also, the respin feature is a great idea – personally I think that this feature is better than a bunch of free spins. Overall awesome game!”

“With exciting mechanics, rocking music and a thrilling gameplay experience, Diamond Inferno is sure to delight and excite players. The expanding reels, multiplier trail and unlimited respin potential offer the chance for tremendous wins, whilst the eye-catching graphics provide all the makings of a hit slot game.” – Andrew Booth, Director of Games at Microgaming.