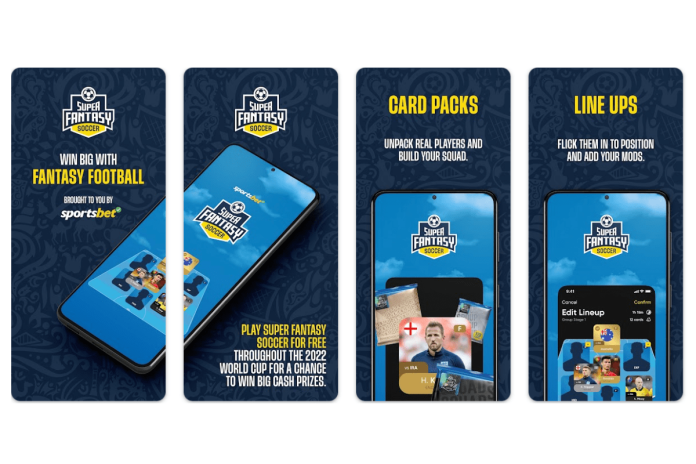 Low6, the award-winning global leader in sports gamification, has launched a game with Sportsbet, the market leader in online sports betting across Australia, for the FIFA World Cup.

Super Fantasy Soccer, which has launched as the partnership’s first game, is a spin-off of the hugely successful UltimateFan franchise. Within 36 hours of its release it has already topped the charts, becoming No.1 Top Free Apps in Sports on the App Store.

Sportsbet has identified Low6’s high-value gamification proposition as both a simple, high value turnkey acquisition play and an engaging way to add value for its existing customer base, so has appointed Low6 to deliver free to play sports games, starting with Super Fantasy Soccer.

In the game, users are issued and rewarded with ‘packdrops’ which reveal player and team cards to create lineups for each World Cup match. With points being earned from the player’s real-life performances, Users compete on a global leaderboard to win a $50,000 prizepool every week as well as the ability to create and join Invitational Leagues to compete against their friends, family and colleagues. Sportsbet’s live odds are also integrated into the gameplay to further enhance the experience.

UltimateFan has already proved to be a huge hit for Low6 with over 200,000 Installs for the game to date. Launched initially for the Euro 2020 soccer tournament, within weeks of the English Premier League season starting it had become the Number One Top Grossing Sports App in the UK and the No.2 Most Downloaded UK Sports App. With franchised games for the NFL Cincinnati Bengals, Jacksonville Jaguars and LA Chargers, it scooped “Fantasy Product” and “Innovation of the Year” at the EGR Awards as well as Low6 being recognised as “B2B Fantasy & DFS Supplier” at the EGR B2B Awards 2022.

Jamie Mitchell, Low6 CEO comments, “We’re very proud to be working with Sportsbet and excited to help them continue to grow their market-leading position in Australia with innovative gamification. Given the success of UltimateFan, we’re confident that our leading sports products will acquire new Sportsbet users on mass as well as increasing daily active users throughout the World Cup and beyond”.