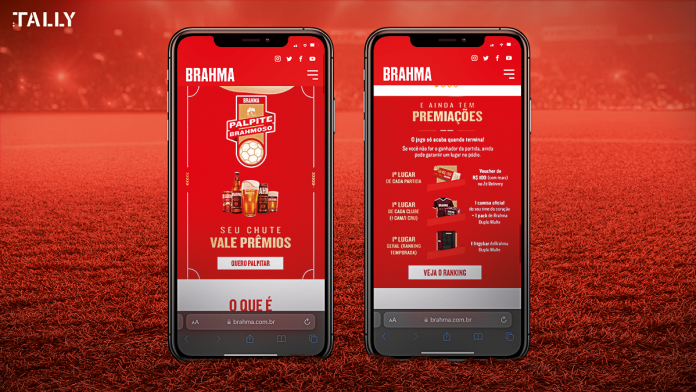 Having gained 4,000 registered players immediately after the game going live, Tally followed up with a product covering each of the two clubs’ matches played in June 2022. Ambev created a bespoke brand and developed a landing page where players could select games to predict, with the data collected from fans during each contest providing valuable insights for the brand. The program included an offer for 30% off the first beer home delivery order.

Tally’s relationship with Ambev began when it was chosen as a winner of the Golaço Challenge for start-ups in November 2021, after impressing the judges with its continuous fan engagement platform.

Having now signed a deal with Ambev to continue providing prediction games for Atlético Mineiro and Cruzeiro, across both the Campeonato Brasileiro and the Minas Gerais state championship, Tally is aiming to add more clubs and championships in future years.

Barbara Mundin at Ambev, said: “As sponsors of Brazil’s premier sporting events, we are always looking for new ways to build relationships with the country’s hugely engaged, passionate fan communities. Ever since winning the Golaço Challenge, Tally Technology has impressed with its continuous fan engagement platform which has delivered both a fun, easy to play predictions game for supporters and highly valuable data-led insights for our brand.

Brad Vettese, CEO of Tally, said: “Brazilian fans are well-known for their devotion to sports and in signing this deal with a brand on the scale of Ambev, it allows us to serve a large, highly committed, and energetic community. Ambev has shown great faith in us since we started working with them and it’s gratifying to serve them with a unique fan engagement environment and a powerful data tool over the coming years. It’s a partnership that we see as going from strength to strength.”

Tally Technology was founded in 2018 as a free-to-play prediction game for brands, professional sports teams, leagues and media platforms seeking a turnkey fan engagement platform. As part of the natural game play, Tally is building a database of unique users and gathering data on those users’ gaming, wagering, brand preferences, consumer spending and other insights.

Over the past four years, Tally has recorded more than 20 million predictions from unique users across North, Central and South America. It is the fan engagement platform choice of some of the biggest names in sports, including the Los Angeles Rams, Green Bay Packers, Buffalo Bills, Los Angeles Lakers, Atlanta Hawks, St Louis Blues, Edmonton Oilers, Los Angeles Kings, Ceara and Atlético MG.