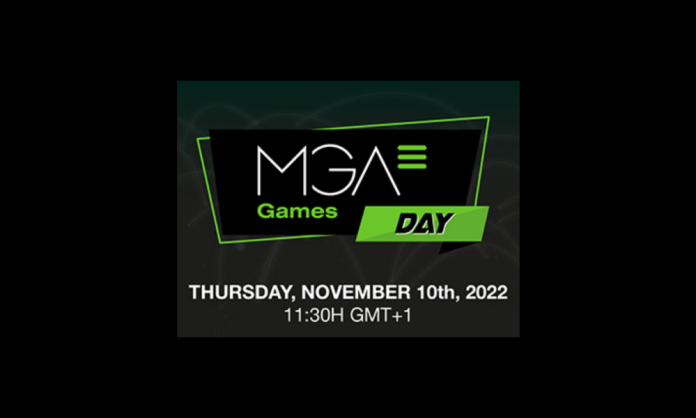 MGA Games, opened its doors again with the 3rd edition of MGA Games Day. The virtual meeting presented the company’s latest news and plans for the future. In 2023 the company will double the number of games and commit heavily to its 5-reel and Megaways products internationally. MGA Games will also present a new series of games developed from land-based machines and will be expanding strongly in Portugal, The Netherlands, Sweden, Denmark, and Italy with leading partners in the market.

All of this in keeping with the essence of the company and its localized product strategy.

“Being a leader is not easy. It requires maximum effort and perseverance, which is the DNA of MGA Games”, said its CEO and founder, Joan Sanahuja. This is how MGA Games has become a leading provider in the industry. It is the result of “our commitment to innovation and the creation of unique content” he said. Joan also highlighted MGA Games’ “unique positioning vision in the gambling industry” – a factor that adds to “the perfect execution of our strategic plan year after year to position ourselves as leaders”.

The company, created in 2001, with a portfolio of more than 100 titles, has had a year-on-year growth of 35% over the last 5 years. MGA Games currently leads the Spanish market with a penetration of 99% and a 15% market share. “The incorporation of highly qualified personnel to provide the best service to our clients is key and one of our priorities,” said the CEO of MGA Games. And the fact that the company is considered a great place to work in the sector makes it easier to “count on top-level, expert, and qualified personnel.” The quality is in the company’s products, with excellent animation, graphics, and great download speed.

José Antonio Giacomelli, General Manager at MGA Games, explained the company’s news and plans for the coming year. In 2023, MGA Games will double the number of productions launched in 2022. It will also be heavily committed to its 3-reel product, with more than 24 games, and above all and following its international strategy: its 5-reel and Megaways products, with 28 new productions.

As in 2022, MGA Games will continue to bring successful land-based games to the online world, a product that has received great acclaim. In the Spanish market, the company will release R. Franco classics such as El Habanero, Reinas de Africa, Cavernícola, Jazz & Blues, and the star game: El Lejano Oeste.

But perhaps one of the most striking novelties within the localised product strategy is the addition of the best Spanish television games to the MGA Games online catalogue. For the Spanish market, this means prime-time productions such as La Voz, number one in audience viewings in its time slot; Pasapalabra, a Spanish TV classic and Mask Singer: adivina quién canta, the TV program currently featuring the most celebrities.

The Spanish Celebrities catalogue will, of course continue to grow and will feature famous faces such as Gemma Mengual, the important Spanish athlete with more than 24 Olympic medals; Sofía Cristo, the well-known DJ, and producer, and one of the most popular celebrities on television at the moment, Makoke.

Internationally, MGA Games will continue its expansion plans, with important agreements for continued growth in Sweden, Denmark, Italy, Colombia, and Portugal. These countries already have more than 200 localised products to which MGA Games will add more mini-games, Free Spins, multipliers, and Wilds. And in 2023, 4 new Megaways slot games will also be available.

Localised product will be created for each of the international markets, focusing on famous people from each country but also on productions with local themes. For Portugal, Portuguese Celebrities joining the series include the famous actress Sofia Sousa; the renowned influencer Andreia Da Silva; Elisabete Moutinho, one of the country’s top models, and the star influencer Maria Nunes.

For the Dutch market, the Netherlands Celebrities will feature top celebrities such as the Dutch Instagram star Aylin Hayret and the TV personality Bobbi Eden. While in Italy, with 50 new operators thanks to agreements with Microgame, 2023 will see Italian Celebrities of the magnitude of actress and dancer Marina Evangelista, the revolutionary influencer Elena Rizzello, presenters Floriana Messina and Jolanda de Rienzo and the showgirl Elena Morali.

All these productions will undoubtedly be impressive and surprising. The company is determined to make 2023 mark ‘a before and after’. The company is also exploring the Markets in Asia and North America, and “There will be news on these developments very soon,” Giacomelli said.

The leitmotif for this year’s event was about connectivity. “We are all connected” and “in 2023, everything will be connected.” This connectivity was made evident by the participation of the company’s principal partners and clients in the MGA Games Day. These big players in the gaming sector who give paramount importance to the continued improvement of their results connected with the event to share their views. Javier Lanfranchi, Sales Director at MGA Games, presented the event and spoke with these important MGA Games partners to “know what the sector thinks from different places on the planet”.

Paul Guyton, Marketing Coordinator at Finnplay, from Finland talked about MGA Games’ great product and table games. Finnplay has been in the business as a platform provider for 15 years, mainly in regulated European markets such as the Netherlands, Romania, and Lithuania. “When I first came across MGA and their team I was very taken aback by their diverse portfolio with the likes of their table games, their 3-reel slots, their 5-reel slots, their online Bingo and my personal favourite, the premium Celebrity games as well as the Megaways slots,” reflected Guyton.

From Poland, Nikita Keino, Partner Managers Team Lead Game Aggregator at Softswiss, talked about opening up to new international markets. SoftSwiss is an international igaming company founded in 2009 supplying certified software solutions for managing gambling operations. “MGA Games develops first rate games that are a perfect fit for Spanish and LATAM markets,” he said, adding that “this co-operation can be called a win-win.”

From Malta was Callum Harris, Director of Partnerships at Pariplay, who spoke about the value of having localised content. PariPlay is the number one aggregator in the business, with a market reach focused predominantly on regulated markets, “which is why MGA Games is so exciting to us,” he said. Pariplay, which is expanding in Latin America and North America, highly appreciates “how specialised MGAs’ content is for certain regulated markets. It is the localised content that MGA produces and develops that sets them aside from other suppliers in the market,” said Harris.

Finally, also from Malta, Luis Alberto López Acuña, Country Manager of Platin Casino, spoke. For him, customer service is paramount. “We have a natural passion for top-notch casino games and a vision, focus on player satisfaction,” he said, noting the excellent relationship between the two companies. Furthermore, he said “localised content is always a priority within our roadmap”.

MGA Games Day 2022 ended with an invitation to casino operators around the world to come and meet MGA Games in Barcelona. To live the MGA Games Experience. To get to know the passion, innovation, growth, hard work and aspiration and core values of the company. But also to get closer to the history, culture, creativity, gastronomy and leisure of the city of Barcelona. “We are waiting for you in Barcelona! We look forward to seeing you at the MGA Games Experience!” With this invitation, which is more of a ‘see you soon’ than a ‘goodbye’, Javier Lanfranchi bid farewell to those attending the event.

Lotto.com Launches, Transforming How the Lottery Is Played