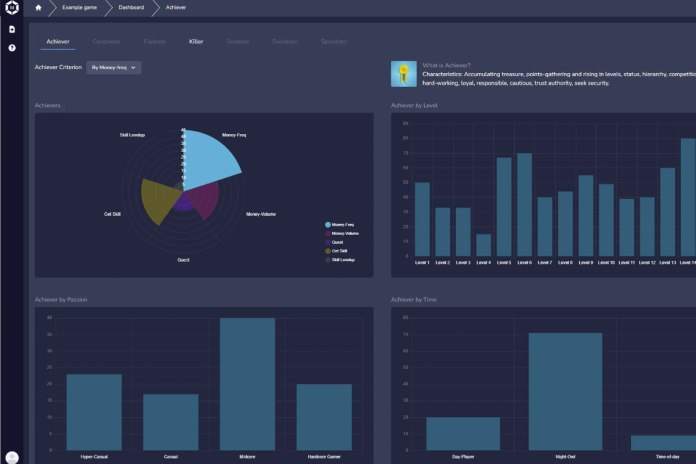 Metanomic, the complete game economy and player analytics company, today proudly announces the global launch of its Thunderstruck player analytics platform; which is poised to revolutionise game developers’ use of behavioural data to improve retention and monetisation.

Thunderstruck is the first ever video game analytics platform to leverage AI-powered behavioural analytics. It makes use of Bayesian inference-backed AI to understand data from real in-game events, drawn directly from game servers. Thunderstruck analyses player motivations, play styles, and reward preferences, providing developers with live information on who their game is for, what types of players have the highest retention, and which players spend the most in-game. Until now, game creators have had to rely on outdated player classification models combined with market research, and plug gaps in insight with assumptions and guesswork.

Metanomic was founded in 2021 by veteran game designers, AI experts, and professional economists, and has successfully secured USD $2.9 million pre-seed funding to-date. Thunderstruck is launching with 7 player types – Killers, Achievers, Explorers, Socialisers, Speedsters, Conquerors, and Scientists – which can be tailored to the priorities of individual game titles. Player types will be refined and added to as the platform analyses data from more titles, while its Bayesian AI means Thunderstruck can even identify the series of events that lead to specific player actions.

Announcing the launch of Thunderstruck, Theo Priestley, CEO and Founder of Metanomic, said:

“For too long, game developers have relied on blunt instruments to understand their players. It’s no exaggeration to say that the bulk of the games industry’s framework for player classification dates back to a 1996 essay by Richard Bartle. A generation later, Thunderstruck is the next big leap forward, taking just a few days to generate more insight than a team of analysts could in a month. We understand that players can straddle multiple personas or even change persona based on their motivations, and use custom AI and live data to accurately anticipate how they’ll respond to metagame changes. Thunderstruck is all about empowering game developers with a better way to identify, acquire, and impact the right players for their game.”

Thunderstruck is equally suitable for mobile, console, and PC; existing as well as new games; and web3 as well as traditional web2 games. It works in tandem with Metanomic’s free Economy Engine platform, which was launched earlier this year to help studios to build, simulate and monitor their game economies.

Thunderstruck is launching with 7 player types.