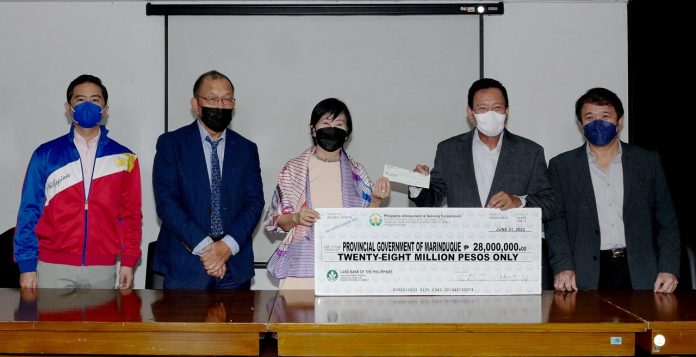 THREE new beneficiaries received funding for their respective community development projects after the Philippine Amusement and Gaming Corporation (PAGCOR) released a total of P30.09 million in financial grants on June 21, 2022 at the agency’s Executive Office in Manila.

The provincial governments of Marinduque and Ilocos Sur as well as the Nueva Vizcaya Police Provincial Office received their cash grants from PAGCOR Chairman and CEO Andrea Domingo, who was joined in the distribution of checks by President and COO Alfredo Lim and Directors Gabriel Claudio and James Patrick Bondoc.

Marinduque was granted P28 million, which Provincial Governor Presbitero Jose Velasco. Jr. said will be used for the construction of four covered courts in different barangays.

Ilocos Sur, meanwhile, received P1.89 million for the procurement of 55 computer sets that will be distributed to ten municipalities and one city in the first legislative district of the province. Acting Provincial Treasurer Ronnette Victa, who represented Governor Ryan Luis Singson received the donation.

The state-run gaming firm also turned over P199,833 to the Nueva Vizcaya Police Provincial Office Director Police Colonel Ranser Evasco to finance the purchase of a laptop with printer and a TV set.