Home Canada PLAYMAKER RANKS #1 IN LATIN AMERICA AND IS NOW RANKED #6 ACROSS... 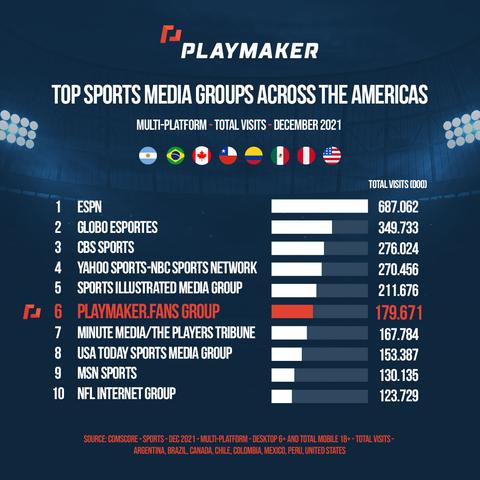 Playmaker now ranks as a top-25 digital sports media group in the U.S. after generating 18 million visits to its properties in the U.S. in December 2021. Additionally, Playmaker now ranks as the 15th most popular digital sports media group in Canada (2) with 4.2 million visits in Canada in December 2021, per Comscore’s ratings.

Playmaker has also been once again ranked as the number one regional digital sports media group throughout Latin America for December 2021. Through it’s market leading web properties such as Bolavip, Redgol, and Somos Fanaticos, as well as leading social media and video properties Cracks, VarskySports, and Fanaticos Por Futebol, Playmaker continues to deliver to its fans a complete multi-channel content experience across Brazil, Mexico, Colombia, Argentina, Peru, and Chile.

“We continue to focus on the Americas as our core market,” commented Jordan Gnat, Playmaker CEO. “Strong organic growth year over year is the result of our teams executing each day and leveraging key centres of excellence that we have created. We have acquired great companies and we have helped turn them into market leaders.”