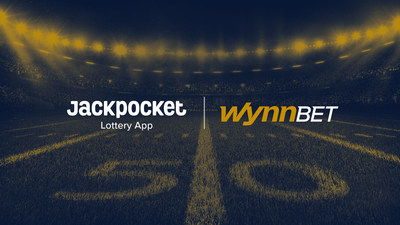 Jackpocket, the leading third-party app in the U.S. to provide a secure way to order official state lottery tickets, and WynnBET, the premier online sports betting and casino app from the global leader in luxury hospitality, Wynn Resort, announced a partnership to deliver exclusive offers to New York State players.

The partnership kicks off with a joint “Big Game Big Deal” promotion available immediately in the Jackpocket app. Players in New York who sign up as new WynnBET customers through the Jackpocket app will receive $200 in free bets on WynnBET after placing their first $10 bet with odds -120 or greater (e.g., -100, +150, +2,000). As part of the promotion, customers will also get back their initial $10 deposit to WynnBET in the form of lottery credits to play on the Jackpocket app.*

“As Jackpocket expands into new gaming verticals and partnerships, we’re excited to provide special offers, exciting sweepstakes, and new chances to win back to our players,” said Jackpocket CEO Peter Sullivan. “Teaming up with WynnBET ahead of the biggest night in football is a great opportunity to bring increased awareness to their online sportsbook and deliver more value to Jackpocket app users.”

A 2021 Jackpocket user survey showed that over 13% of players had engaged in sports betting in the last 6 months. Jackpocket, which launched in New York in January 2020, is WynnBET’s first third-party lottery app partner.

Available in 10 states, Jackpocket provides an easy, secure way to order official state lottery tickets for Powerball, Mega Millions, Win 4, and more. To date, lottery players have won over $100 million in lottery prizes using the Jackpocket app, and eight individual players have won prizes worth a million dollars or more.

The treasure from the arcades – Finally restored and ready for release!

The future of crypto gaming is here & make money at same time =...