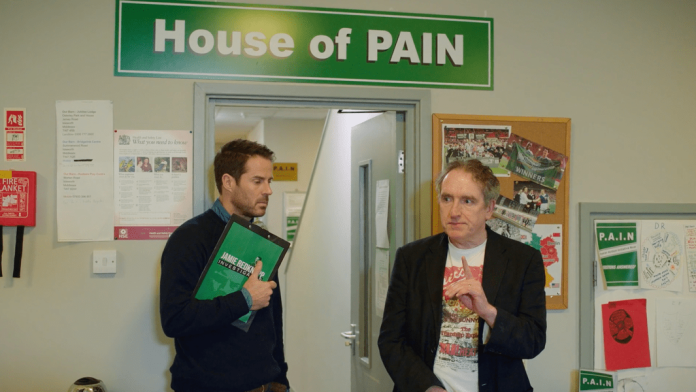 Redknapp returns for a showstopper season finale, shaking the sense into ‘Premiership’ stalwarts

The third and final part of Paddy Power’s viral Jamie Redknapp Investigates series sees the legendary footballing figure uncover a generation of fans that refuse to move with the times.

Previous episodes saw Redknapp dig into half-and-half scarves and online trolls, and in episode three, the final instalment of season one, Jamie tackles the peculiar section of football fans who still call the ‘Premier League’ the ‘Premiership’.

Redknapp starts his investigation by meeting Charlton fan, Simon – whose team were relegated from the Premier League in 2007 – who explains that the “last time Charlton were there, they called it the Premiership, so that’s what I call it now.”

Simon goes on to explain how his continued stance of calling the division the Premiership has led to him losing out on job promotions, any matches on Tinder and faces hostility at dinner parties.

“You know, you call it the Premiership at a dinner party, you might as well throw your own s*** at the wall.”

Redknapp explains to viewers that an estimated 5% of football fans still call the league by its old name. To learn more, Redknapp visits the Premiership Action Initiate Now (PAIN) group at their HQ called the House to find out more from founder, Graham.

First set up in 2007, Graham explains how the organisation has lost one of its six members due to an original member thinking “it was a hip-hop fan club by mistake.”

“What we are about, is keeping things as it should be”, states Graham, insisting that Snickers bars, Starbursts and Cif should still be called Marathon, Opal Fruits and Jif respectively.

But as Redknapp probes his arguments, Graham is unable to explain why PAIN want to call it the Premiership when the league’s original name was in fact Division One.

Charlton fan Simon then invites Jamie to his home to show off his engagement to new partner Julie – who, despite his reluctance to, calls it the ‘Premier League’.

But Redknapp puts his foot in it when he asks the couple whether any future children would be brought up to call it the Premiership or the Premier League and is quickly shown the door.

“I’m a serious investigator” pleads Redknapp to Simon, “we have to ask these questions.”

Spokesman Paddy Power said: “Jamie’s done a great job uncovering some of football’s more annoying elements throughout the series and this episode is no different with fans living in the past.

“And let’s be honest, it’s completely understandable why some fans might want to when they look at their lot now. Isn’t that right Man United fans? But sometimes you have to move on because nothing lasts forever in football – not even Spurs’ trophy drought…okay maybe that one will.”