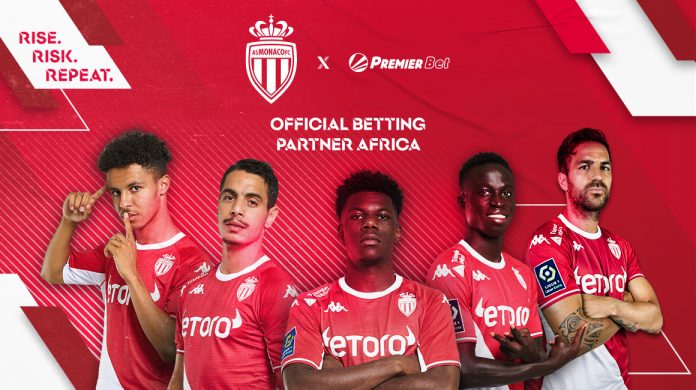 AS Monaco is pleased to announce a partnership with Premier Bet, a leading iGaming brand, which becomes the Club’s official betting partner in Africa for two seasons.

Premier Bet has become AS Monaco’s first official regional partner in Africa, enabling the Monegasque club, which also has regional partners in Russia and Asia, to strengthen its international presence. Through this collaboration, Premier Bet, which will benefit from visibility in Africa via the virtual LED technology of the Stade Louis-II during AS Monaco’s Ligue 1 matches Uber Eats, is strengthening its ambition to become the first operator in the iGaming sector in Africa within the next five years.

A common history between AS Monaco and Africa
Today, Premier Bet trades in eighteen markets, has millions of customers across its online platforms and strong plans for extending its presence into other African markets. It’s leading payment technology infrastructure ensures 120+ payment integration points whilst the support of a 2,500+ strong retail footprint and 90,000 kiosks gives it incomparable presence and credibility.

AS Monaco has long been a champion of giving young African footballers the dream of playing in one of Europe’s elite leagues and developing them into future stars of the game. From the early days of giving Ballon d’or winner George Weah his break in Europe to their current star, Krépin Diatta, Monaco, like Premier Bet, are firmly invested in Africa. This partnership will bring the fans closer to AS Monaco with the opportunity to win exciting prizes, access to unique content and money can’t buy experiences and great products and services, only available at Premier Bet.

This new and exciting partnership kicks off with a new multi-media, multi-market advertising campaign throughout the 2021/22 season and beyond in the countries where Premier Bet is operated.

CEO of Premier Bet, Martin Nieri
“AS Monaco are synonymous with innovation and developing footballing talent, particularly in French speaking countries across Africa. Their success on the pitch is matched by their innovation off it, as they set themselves up to become a digital pioneer in the same way we are doing at Premierbet.com. As Premier Bet looks to strengthen its position in key markets such as Senegal and Cameroon, we intend for this unique partnership to help create brand fame and cut-through, as well as providing their millions of African-based fans with new and exciting ways to experience Premier Bet.”

Oleg Petrov, Vice-president and CEO of AS Monaco
“AS Monaco is proud to continue its development on a global scale. This new international partnership shows that the Club is attractive beyond its borders. Collaborating with Premier Bet is proof that we want to reach new territories. Africa is a real footballing land and we look forward to developing the Club’s presence there through this partnership. Premier Bet’s ambition to be a major player in the iGaming is in line with our desire to be at the forefront of the game.”

Kyiv’s Dnipro Hotel to be Transformed into Esports Arena

Scientific Games’ New James Bond 007 Branded Games Off To A Blockbuster Start With...