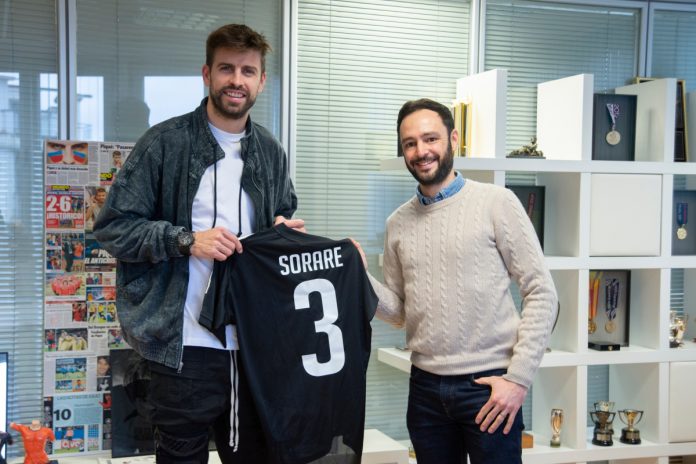 Football superstar Gerard Piqué and ex Coca-Cola VP Emmanuel Seugé through his fund Cassius Family are investing EUR 3 million in Sorare as a seed extension. Sorare card sales volume grew by more than 1000% in 2020 with 80 clubs joining during the year including European Champions: Bayern Munich, Juventus, Paris Saint-Germain, Porto, and Zenit with more Champions coming before the end of the year.

Fans no longer want to just consume football entertainment, they wish to participate in new and exciting ways. Gerard Piqué has been at the forefront of reimagining these new paths with Kosmos and now with a strategic investment in Sorare. Gerard Piqué will join Sorare’s board as a Strategic Advisor, together with existing board members Christian Miele, co-founder Nicolas Julia, and co-founder Adrien Montfort.

Gerard Piqué, Chairman of Kosmos, comments: “I see a huge potential in the sports gaming segment in a digital economy where the attention of audiences is the single most important unit of currency. I’m looking forward to helping Sorare  expand their partnerships with football leagues, clubs, and players worldwide to build the best fantasy experience that exists.”

Sorare CEO Nicolas Julia added: “Gerard is not only one of the best defenders in the world but he is also an active entrepreneur and is re-defining the sports and entertainment industry. The strategic counsel and business acumen Gerard brings to our board is invaluable. I’m excited to have him join our team to unlock people’s football fandom online with Sorare.”

European Giants have joined Sorare in 2020

5 European 2020 Champions have all launched their digital cards on Sorare this year. Bayern Munich, Juventus, Paris Saint-Germain, Porto, and Zenit with more Champions coming before the end of the year. Since opening the beta in December 2019, 80 football clubs have joined Sorare from 11 countries to help create a unique and global fantasy football experience. Sorare is an opportunity for clubs and leagues to allow their fans to express their fandom with digital cards, amidst the current lack of live games as well as to expand their international brand by reaching several untapped audiences of fans. It is effectively opening up a new revenue stream for clubs, by creating a new licensing category: fantasy football licensing.

While sports fans have been able to collect and trade player cards for decades, this was limited to the physical world. Sorare is on a mission to unlock people’s football fandom online. The company is creating an open world of games with digital cards, where people can express their affiliation with a club or player, build meaningful identities and relationships with it, and seize new economic opportunities around it. The Sorare cards are fully licensed, and provably scarce thanks to blockchain technology, creating a new level of trust for fans and clubs.

Fans collect digital cards of players for the same reasons they collect cards offline – status, differentiation, identity, and membership. This also offers the most direct way of investing in the upside of a sports player. Sorare’s current total addressable market is at the intersection of fantasy football and sports cards and memorabilia that is respectively estimated at $5.4B and $18.6B globally. After having acquired more than 50,000 users in 2020, Sorare is expecting to see these numbers more than triple next year.