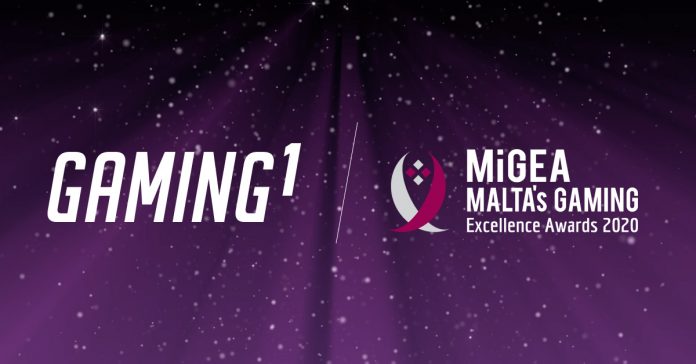 Held annually at the Intercontinental Hotel in St. Julian’s, the MiGEAs, now in its fifth year, is dedicated to honouring the Maltese gaming industry’s high-flyers – with a host of categories to recognise innovation and operational excellence.

Marking a standout year for the company, 2020 saw GAMING1 has  expand its operations by adding over 100 new employees, launching its own proprietary AI player protection tools alongside a raft of new games and partnering with the likes of Kindred and the R Franco Group.

“I’ve been blown away by the fantastic work each member of the GAMING1 family has put in this year – and our outstanding evening at last week’s ceremony is testament to just that.

“Marking a decade of success, our unique business model has helped our partners succeed across the globe, seamlessly transitioning  to the online sector. I’m fully confident that we have an outstanding 2021 ahead of us and look forward to another record-breaking year with our fantastic team.”

GAMING1 has its sights firmly set on continued international expansion with a burgeoning development pipeline for early 2021.

The company is currently in the process of establishing a land-based network with its Circus brand across France, as well as undertaking a joint venture with JOA, who run more than 30 French-based casinos.

In total, GAMING1 operates 42 gaming halls and casino resorts in Belgium, Switzerland, and France, as well as managing a portfolio of 20 online operations in regulated markets across Spain, Portugal, Serbia, Peru and Colombia.

US Bookies Starting to See Interest in Esports Rise Dramatically

FeedConstruct to Exclusively Cover the Comeback of Ukrainian Football