Home Latest News REVEALED: Which Gamers Are the Most Antagonistic? 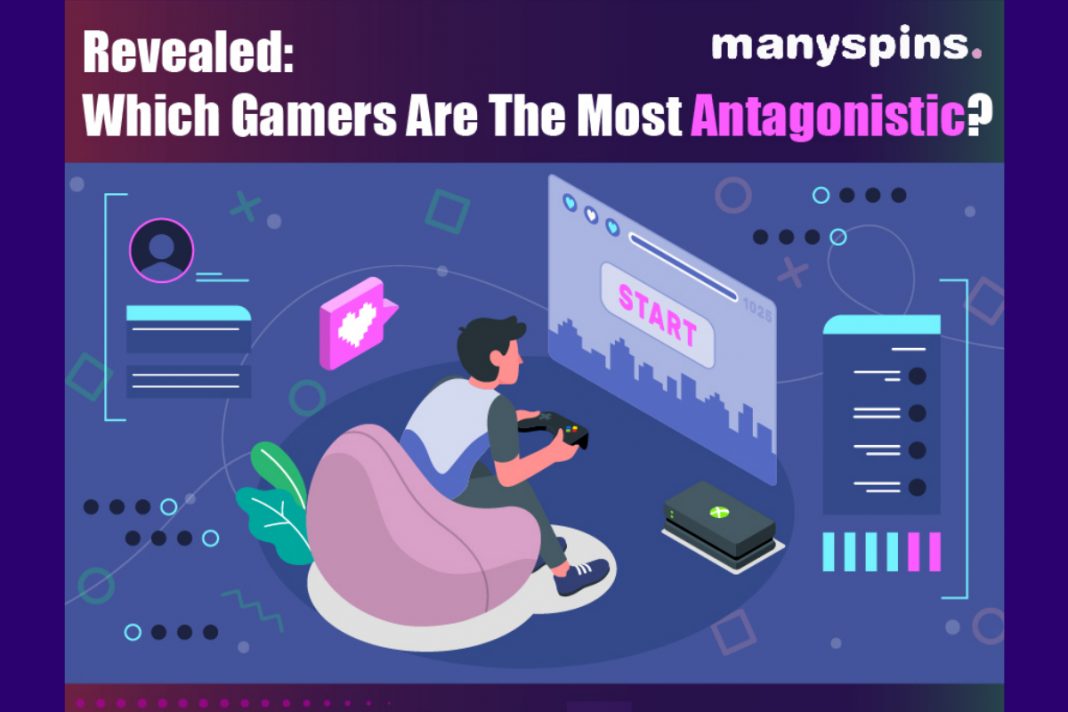 It’s well known that online games can be very intense, and this often leads to some very heated confrontations between players, especially online.

ManySpins.com analysed Google search volumes for ‘report [game/console] player’ and other similar phrases to uncover which game and console creates the most conflict between players. After scouring through searches surrounding the 42 most popular online games, they can reveal which gamers are the most unfriendly and antagonistic.

Which Console Has the Most Antagonistic Players?

ManySpins.com found that Xbox users are the most antagonistic! There are hundreds of online complaints about users who seek to anger others through Xbox Live chats. On average, each year there are 166,920 searches from players looking to complain or report other Xbox Live accounts.

Following very closely behind are PlayStation users. ManySpins.com discovered that each year there are 165,840 Google queries from PSN accounts looking to accuse their opponents of misbehaviour. Sony attempted to curb potential abuse by combining party and messaging systems last month but many players have been left displeased with their attempt.

Which Game Has the Most Antagonistic Players?

The title of most antagonistic gamers goes to Fortnite! There are countless stories from innocent users who claim that fellow Fortnite players ruin the game by citing abusive and toxic language. Each month there are 3,750 searches from players looking to report one another for hostile behaviour – that’s equivalent to 45,000 each year!

In second place are Roblox fans. These gamers certainly know how to get on one another’s nerves as 25,920 of them try to report opponent’s accounts annually.

Dead by Daylight players rank as the third most hostile, with 17,160 searches each year from gamers looking to take action upon others’ unfriendly behaviour. A lot of players put the abuse down to being new in hopes that it’ll get better and they’ll be welcomed, with others stating that turning the chat option off is the most effective way of combating the toxicity.

The fourth most antagonistic gamers are Apex Legends players. ManySpins.com found that every year 12,960 fans turn to Google to find justice amid the hate received.

In fifth and sixth position are Overwatch and Tom Clancy’s Rainbow Six Siege, receiving 12,120 and 9,840 report searches each year respectively.

To complete the top ten list of most antagonistic players:

How are players negatively affected by online games?

ManySpins.com also surveyed 1,980 players worldwide to uncover how much other players affect their online gaming experience.

They found that almost 7 in 10 (68%) gamers have had their day ruined by a negative online player who has destroyed their mood. An additional 61% state that they have been made to feel uncomfortable by comments made by others during live chats whilst playing online.

Over half of players (54%) admit to being pushed out or having to force quit an online game due to bullies.

This year many games have sprung to the top of the popularity charts, bringing new and fun player experiences. However, almost 3 in 5 (57%) believe that once certain games spike in popularity it correlates with players becoming more aggressive and consequently attracting a more toxic player base.

Ultimately this has led to more than 2 in 5 (43%) ditching specific games due to the negativity that online play brings.