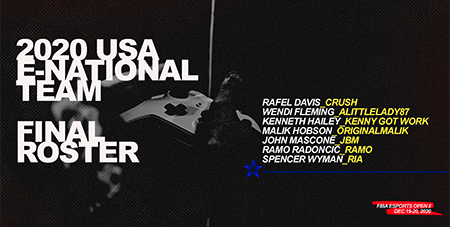 Following two days of trials featuring some of the top 2K gamers in the nation, USA Basketball has officially named the 2020 USA E-National Team, which will compete in the North and Central America Conference in the 2020 FIBA Esports Open II from Dec. 19-20.

“It was actually extremely hard to pick this team,” said avid gamer Aerial Powers, a 2015 World University Games gold medalist and a forward with the WNBA Washington Mystics, who is a member of the USA Basketball E-National Team Selection Panel. “ A lot of people played well, and the battles, some of the games came down to the end. You’ve got to think, in the USA Basketball trials, you have to perform in these few days, right? Because, we’ve seen them play in the 2K League, we’ve seen them ball out, but it’s over a whole season. But now, it’s subjected to this time, on this day. So, your performance has to be at its peak. Some games we saw players do well, some games players weren’t doing well, but some were really consistent.

“All-in-all, all 30 players are just so great that during the panel discussions we started arguing about who we wanted to be on the team,” continued Powers. “The competition was so great that it was extremely hard to pick the seven. It wasn’t that the other players weren’t good, it was just that we had so much great competition.”

“I’ve been into esports my whole life,” Powers added. “So, just to be on the USA Basketball panel and actually not be playing traditional sports is a great accomplishment. Because I’m trying to pivot, I know what I want to do after the WNBA. This is something I want to do; I want to be in esports. And I’m on the Global Esports Federation, we’re working to get esports into the Olympics. So, this is a push in the right direction.”

The USA will tip-off virtually in the FIBA Esports Open II against gaming teams from Canada, Costa Rica, Dominican Republic, Guatemala, Honduras and Puerto Rico for the right to be crowned North and Central America Conference champions.

While this will be USA Basketball’s first foray into esports, the tournament will mark the second edition of the FIBA Esports Open, the first of which took place in June and included five conferences featuring 114 gamers from 17 national federations. The FIBA Esports Open II field has been expanded to 38 national teams in seven regional conferences.

Each national team will consist of up to seven players, five on the court and two reserves. Games will be played remotely on NBA 2K21 using the Pro-AM mode and allowing for customization of gamer avatars and uniforms.

Africa, Middle East and Southeast Asia conferences will be played Nov. 14-15, the Europe Conference is scheduled for Dec. 12-13 and the South America Conference will be held Dec. 19-20.

As was the case for the inaugural FIBA Esports Open, this entire series will be produced from the FIBA Esports Studio in Riga, Latvia, with 54 hours of live content being streamed on FIBA’s Facebook, Twitch and YouTube channels. Each game will be available online with live commentary in English, as well as a daily show featuring up to 12 games.

Realistic Games Gives 100,000 Reasons to See the Return of Satsuki in Super Graphics...