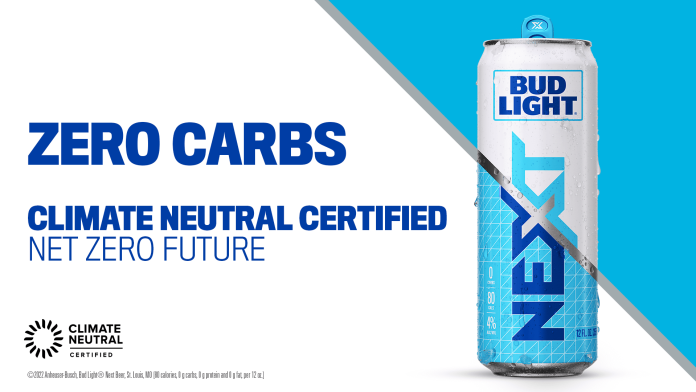 Climate Neutral’s certification builds on internationally recognized standards for carbon measurement, neutrality, and reduction. When Climate Neutral certifies a brand such as Bud Light NEXT, it means the brand has chosen to be accountable for the greenhouse gas emissions generated in the production and operations of their goods or services. To showcase its commitment, Bud Light NEXT will proudly feature the Climate Neutral certification on its packaging beginning in June.

“When we launched Bud Light NEXT, we wanted to bring a beer to market that was all about breaking barriers, just like the consumers it was brewed for,” said Andy Goeler, Vice President of Marketing, Bud Light. “We have a huge opportunity with Bud Light NEXT to take bold action that creates a better future for our consumers and the next generations to come, and our Climate Neutral certification is a big step in that journey for us.”

In honor of this milestone, Bud Light will also be working with its leading esports partner – League of Legends Championship Series (LCS) – to offset 100% of the electricity used during the LCS Spring Finals in Houston, TX at NRG Stadium taking place April 23-24 with clean, renewable sources from wind power.

Today’s announcement for Bud Light NEXT builds on recent actions that Bud Light has taken to protect the environment and encourage consumers and partners to do the same.

· During the 2021 NFL Season, Bud Light was the first major beer brand to join the How2Recycle® labeling program to educate and inspire consumers to recycle their beer bottles, cans and packaging.

· Ahead of Super Bowl 56, Bud Light NEXT teamed up with innovative fleet partners Nikola Corporation and BYD Motors to conduct a zero-emissions beer delivery of Bud Light NEXT.

“We’re excited that Bud Light NEXT is joining our movement, as one of hundreds of brands that have earned the Climate Neutral Certified designation,” said Austin Whitman, CEO of Climate Neutral. “Brewers such as Anheuser-Busch, alongside their brands like Bud Light NEXT, have a tremendous reach with their operations and their consumers. Their involvement is a proof point that climate change is now an issue of widespread importance. And their actions show that we all have ways to respond immediately and visibly to it by avoiding, removing, and reducing greenhouse gas emissions.”

Push Gaming first in the door with Caxino