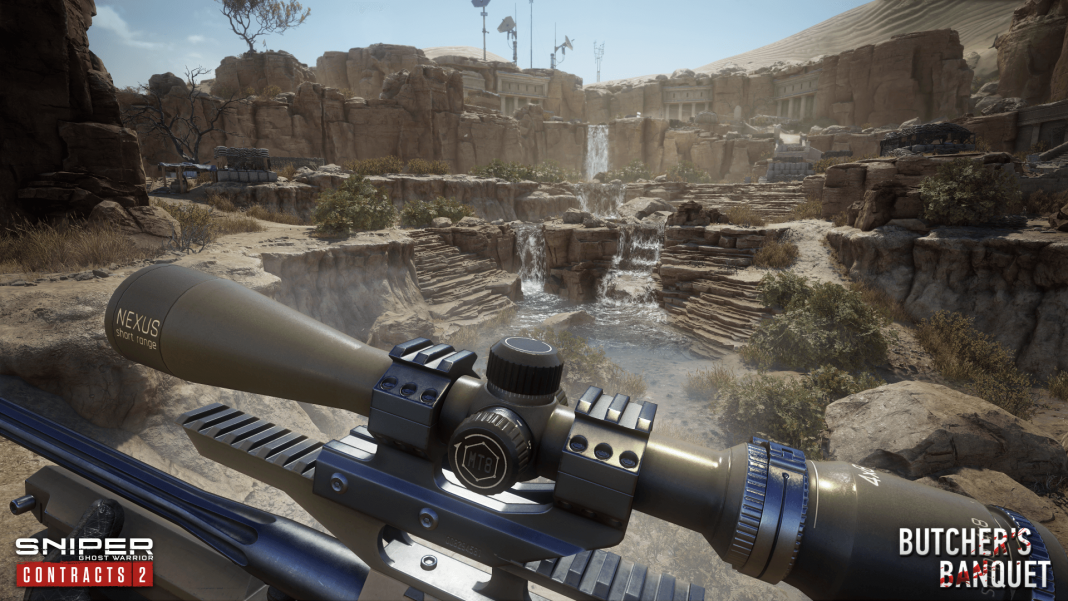 Modern warfare shooter, Sniper Ghost Warrior Contracts 2, released last month to considerable success, and today launches a major content expansion. Ominously titled, ‘Butcher’s Banquet’, the update is free for all players on PS4, Xbox Series X/S, Xbox One and PC, and is immediately available as a patch to the main game.

Featuring an all-new expansive region, ‘Butcher’s Banquet’ takes place in a stunning desert-like area, complete with luscious oases, dramatic waterfalls, and mysterious temples. And whilst it might be especially picturesque, make no mistake – it’s certainly no holiday destination. Following the recent turmoil in Kuamar – the setting of SGW Contracts 2’s main campaign – new threats have been allowed to surface, the most dangerous of which is Mahmoud Zarza… aka ‘The Butcher’.

The new expansion builds on all the elements players loved about the base game, including the 1000m+ extreme-range sniping, next-gen graphics, more intelligent NPCs, and the most lethal array of weapons yet. The challenging sniper game is set in Kuamar, a lawless region of the Middle East, located along the Lebanese and Syrian borders. Players take on the role of Raven, Contract Sniper Assassin, and are tasked with toppling a brutal dictatorship by completing a series of replayable missions that can be approached in a number of ways. SGW Contracts 2 features large-scale sandbox maps, a variety of side missions and objectives, realistic weapons and gadgets, and a range of unlockable skills and equipment.

Players can purchase SGW Contracts 2 on PS4, Xbox Series X/S, Xbox One and PC for $39.99 / €39,99 / £34,99 / AUD69.95. Releasing 24th August, the PS5 edition can be preordered now and arrives with a free copy of the Crossbow Carnage DLC pack, in addition to a suite of next gen features, including 4k resolution, enhanced textures and visuals, Adaptive Triggers, Haptic Feedback and improved SSD loading times.