Home eSports Children from over 100 countries to take part in Football for Friendship... 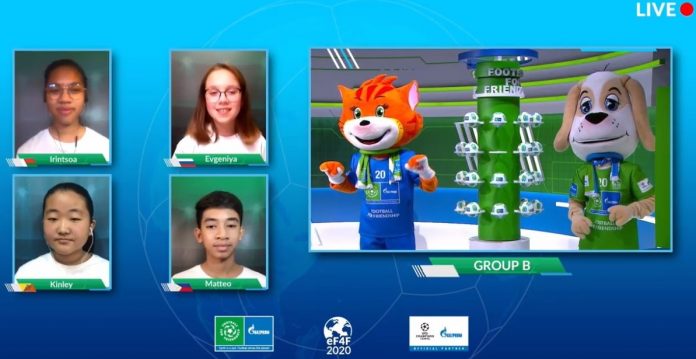 On November 27, as a result of an online draw, 32 international teams of the annual Gazprom International Children’s Social Programme Football for Friendship Championship were determined. Children from all over the world will compete for the title of Football for Friendship World Champions and for tickets to the 2021 UEFA Champions League Final in Istanbul. For the first time ever, the draw was conducted live by Young Participants, and the broadcast’s special guest was the legendary football player Roberto Carlos.

“Football for Friendship is a real social lift, giving the younger generation the opportunity to realize their potential and make their dreams come true. Today, Football for Friendship is once again uniting Young Players, aspiring Young Journalists and simply young people with a passion for sports from all over the world, and everyone here will be able to learn something new, make new friends, and just have an unforgettable experience”, said Roberto Carlos to the Young Participants from different countries.

“Today, we can take pride in a whole generation of grown-up athletes, public figures, journalists and simply goal-oriented young people, who were given amazing opportunities for a professional start by Football for Friendship. I would like to congratulate and wish good luck to all participants of the 2020 Football for Friendship Season”, said Viktor Zubkov, Chairman of the Gazprom Board of Directors, addressing this season’s participants.

Young Participants of the Football for Friendship programme will be the first to play the game. The game app will be made available to the general public on December 10 – World Football Day. You can download it for free for MS Windows, Apple MacOS, Android, iOS.

The International Children’s Social Programme Football for Friendship is implemented by Gazprom since 2013. Over the previous seven seasons, the programme has united over 6 000 participants from 211 countries and regions and over 5 000 000 supporters.

Young Players and Young Journalists are the participants of the programme – boys and girls aged 12 including children with disabilities. Young Players represent different countries and cultures united in the mixed teams. They show that nationality, gender, and physical abilities aren’t a barrier to becoming a team. Young Journalists cover the events of the programme in the International Children’s Press Center. All participants become Young Ambassadors of the programme and continue to share their Football for Friendship experience and promote universal human values: friendship, equality, fairness, health, peace, devotion, victory, traditions, and honour.

UEFA, FIFA, football federations and the world’s leading football clubs, international charity foundations, famous athletes, politicians, and artists support Football for Friendship. The project has received multiple national and international awards in the field of social responsibility, sports, and communications, including the world record for the most nationalities in a football training session in history.

In 2020, Football for Friendship will be held in the online format. A special digital platform will unite over 10 000 players of all ages. It will become the home for international children’s competitions and a playground where anyone will be able to train, join into the international mixed teams and play their favourite game in the Football for Friendship format without leaving the comfort of their home.

NEXT SUPER STOCKS On The Move: FansUnite, Peak Fintech, Logiq, and Skylight Health are...