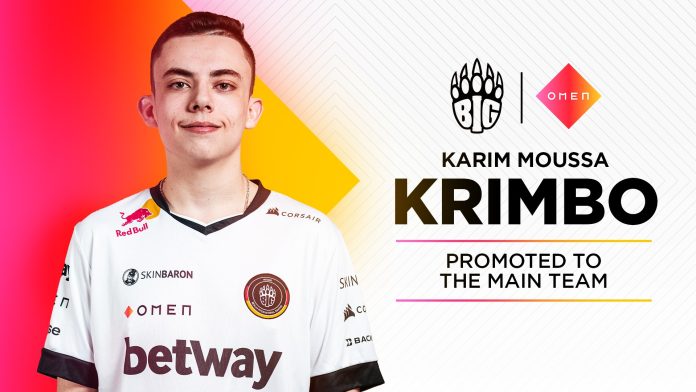 Trialing a BIG OMEN Academy player for the first time, BIG would like to welcome Karim “Krimbo” Moussa to their main CS:GO team!

A household name in our BIG OMEN Academy project, Karim has shown excellence over multiple iterations of the team, most recently acting as the in-game leader and team captain. Under his lead, the BIG OMEN Academy finished in a strong second place in season three of the WePlay Academy League, and secured some notable scalps from international teams in various online leagues.

His fantastic development as a player over the years is one of the many reasons why he is the first BIG OMEN Academy talent to be trialed by the main roster, also marking an important milestone in BIG’s talent development efforts. In turn, Nils “k1to” Gruhne will be moving to the academy roster where he will try to prove himself and work on his comeback to the main roster.

Reworking the roster at the start of 2022 with increased resources, BIG’s academy project built together with OMEN will continue to be one of BIG’s most important projects. The aim of the initiative is to develop an in-house talent pool that guarantees the competitive longevity of BIG’s CS:GO department. The BIG OMEN Academy has already produced some of German Counter-Strike’s future stars, and is considered as one of the best German teams right after BIG’s main roster.

Statement Roman “Roman R.” Reinhardt, Head of CS:GO
“I am delighted to announce that Karim “Krimbo” Moussa is the first player to be trialed by the main CS:GO team from our BIG OMEN Academy project. Karim has shown his capacities in multiple iterations of the academy lineup, and has proved that he deserves the chance. The change means that Nils “k1to” Gruhne will move to the BIG OMEN Academy team for now and will support the further development of our talents there.

Statement Karim “Krimbo” Moussa
“I was very excited when I heard the team wanted to play the Major qualifiers with me, and now very happy that I am being trialed by the team. I have big shoes to fill, but I am confident especially after successfully qualifying for the EU RMR. Thank you for all of the support and of course best of luck to my BIG OMEN Academy teammates moving forward!”

Statement Alphan Özbaltaci, Gaming Marketing Manager DE,AT HP
“It is a pleasure to see a young talent from our BIG.OMEN Academy Team flourish to a pro esports player. I congratulate Karim “Krimbo” Moussa for his achievement and wish him a successful career with Team BIG.”

Mazooma Enters into Partnership with Plaid