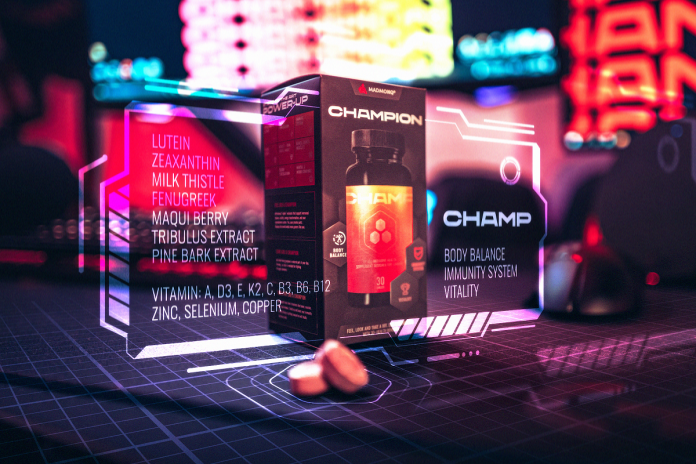 As one of the most disruptive companies in Central Europe merging Health & Gaming, MADMONQ introduces their latest health solution. MADMONQ Champion is the first all-inclusive daily health supplement for gamers.

MADMONQ saw the alarming amount of experienced and novice players facing dangerous threats caused by their dedication to gaming. As one of the fastest-growing industries, the bodily risks are urgent yet largely unnoticed by major faces in the health industry.

“MADMONQ wants to be an inspiration to the gaming community; we want to help them become better, push themselves beyond their limits, and win.” states Michal Noga, founder of MADMONQ. As a passionate gamer with expertise in a pharma founded company in 2016, he saw frequent abuse of bad substances and prescription drugs (doping) for focus in professional matches.

The popularity of supplements is quickly rising as scientific understanding develops on how they help our body adapt to hostile environments (stress, pollution). And help our biological processes cope with insufficient diets and sedentary lifestyles. Usage is only growing every year, but their adoption by gamers lags far behind other demographics, along with their health awareness.

That is why MADMONQ worked over the year to develop an all inclusive supplement for gamers health called MADMONQ Champion. One tablet a day helps combat 30+ symptoms of common health deficiencies confronting today’s players. Champion is a chewable Caffeine and Sugar-free power-up that’s designed for the unique bodily demands, stresses, and conditions faced at home and in esports.

MADMONQ has been charging down the overlooked path of bringing sustainability into gaming for over four years.

After releasing their first natural energy-boosting alternative to unhealthy sugary drinks, start-up co-founders and lifelong gamers Michal Noga (CEO) and Petr Andrýsek (CMO) have continued their partnership intent on innovating health and gaming towards a 2030 vision: to convince gamers’ that their most important piece of hardware is their well-being.

They’ve refused skipping a single step to accomplish this mission and continue to provide cutting-edge and cost-friendly alternatives to the hurtful products that saturate the market for players today.