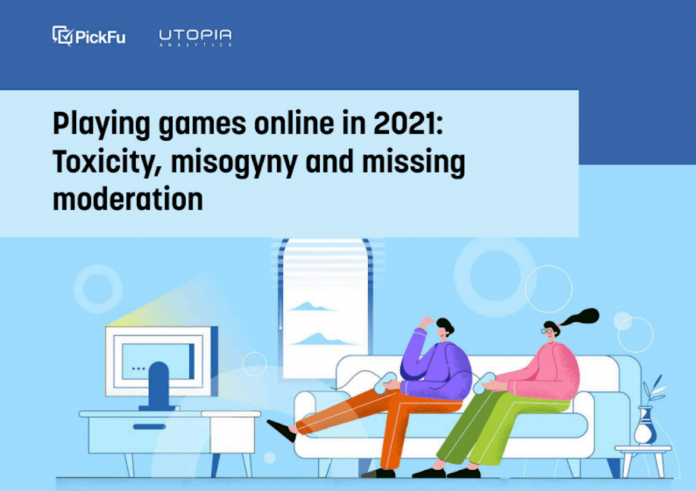 A new joint report by consumer research platform PickFu and AI-based moderation specialist Utopia Analytics finds 70% of online gamers have experienced or witnessed harassment while playing games online. The majority of experienced abuse towards women was reported as misogynistic

Consumer research platform PickFu and AI-based moderation specialist Utopia Analytics have partnered to publish a report based on insights drawn from 1,000 U.S.-based gamers, which lays bare the concerning state of online gaming in 2021.

The report, Playing games online in 2021: Toxicity, misogyny and missing moderation, asked gamers to share their first-hand experiences of toxicity in online games. It found that 38% have been the direct target of abusive remarks from other gamers, and a further 32% had witnessed abuse but had not endured it themselves. In total, a worrying 70% of the gamers polled had been negatively affected by the behavior of other gamers.

With the levels of abuse and toxicity across social media reaching endemic levels, toxicity in games is still represented in the mainstream media as something affecting only a minority of gamers playing ‘hardcore’ FPS titles such as Counter Strike or Call of Duty. However, the experiences of the gamers polled in this report suggest that online abuse is far more widespread, and effective moderation of game communities and online play is sorely lacking.

“People turn to gaming to escape, assuming the virtual worlds they enter will be safe and fun. The reality, in gamers’ own words, is that these negative interactions significantly impact their mental health and enjoyment of games. This should be a wake-up call for the industry to make gaming a safe space for everyone,” said John Li, co-founder of PickFu.

“With so many people turning to games as a way to get through a year of lockdowns and upheaval, there is a risk that many of these new players will be bitterly disappointed if we cannot do more to reduce the ability of this toxic minority to disrupt the enjoyment of the majority, and as an industry take the issue of moderation far more seriously,” said Dr. Mari-Sanna Paukkeri, CEO of Utopia Analytics.

Using PickFu’s online platform, the poll collected feedback from 1,000 U.S.-based adults between ages 18–74 who self-identify as gamers across console, PC, and mobile platforms. The poll collected responses from May 6, 2021, to June 5, 2021. The data was analyzed jointly by PickFu and Utopia Analytics