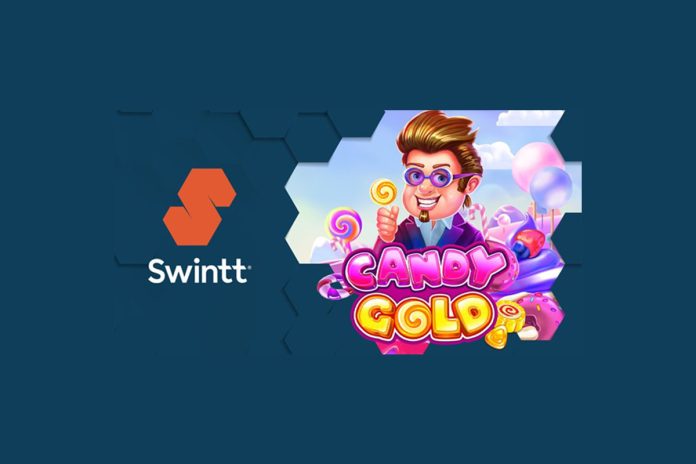 Famed far and wide for their inventive themes and innovative approach to game development, sought-after software provider, Swintt, has once again pushed the boundaries of what can be expected from a humble video slot with the launch of their wildly ambitious title, Candy Gold.

The first game in the Swintt Select line-up to feature cluster pays, Candy Gold does away with conventional pay lines entirely and asks players to instead collect clusters of five or more matching sweet symbols. Played out across a gigantic 7×7 game board, this creates plenty of winning potential from the first spin, but when you also throw in cascading symbols, it’s a whole new level of rewarding.
Essentially, the instant a winning cluster is paid, it will disappear from the gameboard as new symbols drop down from above to fill its place. Should these symbols create further clusters, their winnings will also be added to the current pay out and the process will continue until no new wins are present.

Obviously this means the base game wins can really stack up, but if players want a helping hand in their quest to crush even more sweet treats, they’ll also be able to use one of six Candy Boosters. These special power-ups can be awarded at random whenever enough spins have been made to fill the Candy Booster metre, or purchased directly for an extra wager by using the “Buy Booster” button.
Available options include Candy Gold, Super Candy Gold and Mega Candy Gold power-ups, which add random clusters of one, four or nine wilds to the game board respectively, and a line-up of bombs and rockets that transform existing symbols into higher paying ones. The Candy Bomb turns a nine-symbol cluster into one random high-paying symbol, the Ultra Bomb does the same but for an entire column instead, while the Candy Rocket transforms a column and a row into one symbol in a cross formation.

In addition to these bonbon-busting boosters, players will also need to look out for Candy Gold’s regular wild symbols, which can appear during any base game spin. When one of these symbols arrives, not only will it substitute for any regular candy symbol to create winning clusters, but it will also lock in place for the duration of the round. Should three wilds appear, free spins will be activated.
When the free spins are triggered, players will notice that a new multiplier metre will now be visible. Starting at 2x, the multiplier value will increase after every successive cascading win up to a maximum of 8x and will only reset when no new clusters are created. By successfully cranking this metre up to the max, players can potentially feed their sweet tooth with jaw-dropping wins of up 7,000x the bet.

“The first game in the Select line-up to utilise a cluster pays mechanic and cascading wins, Candy Gold already had the potential to create huge combination pay outs during each new round. However, not content to stop there, we added a bumper line-up of bonbon-busting boosters as well as free spins with progressive multipliers to really put the cherry on top of one of our tastiest slot treats to date.”