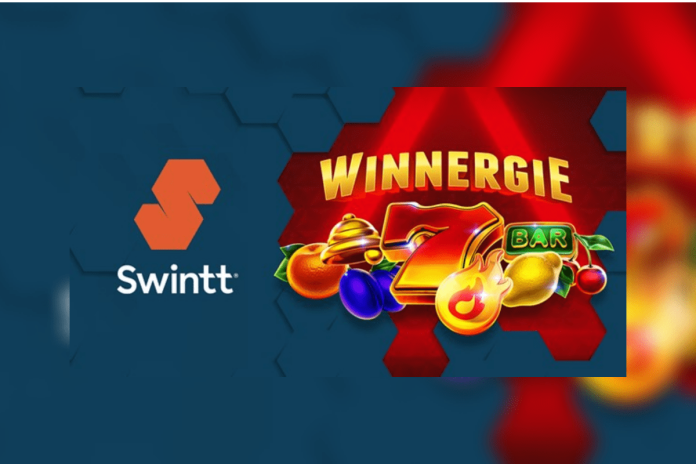 Software provider’s highly-volatile Premium release is ready to set the reels ablaze with top multipliers of 1,000x and a fiery scatter feature that pays out instant-win prizes

Throw off your winter jacket and put the umbrella back in the shed – award-winning software provider Swintt is turning up the heat this April with its brand-new Winnergie slot.

The latest game in the studio’s popular range of Premium releases – a fan-favourite line-up that combines fruit machine aesthetics with the latest in cutting-edge gameplay – Winnergie is a five-reel, five-payline title that offers red hot multipliers of up 1,000x players’ stake and a fiery scatter feature.

Set to a blazing red background, this classically-designed game uses a traditional line-up of symbols that includes BARs, liberty bells and fresh fruits. The highest-value icon to feature in Winnergie is the lucky seven symbol, which triggers the game’s top multiplier whenever five appear on a valid payline.

The special icon that players need to look out for in Winnergie is the golden fireball scatter, as this is essential to triggering the game’s main bonus. Essentially, whenever players land three or more of these symbols in any position, they’ll be awarded an instant payout that increases with every scatter collected. This prize is added on top of all other payline wins, meaning huge combinations are possible.

Keeping this in mind, the beauty of Swinnt’s Winnergie slot lies in its simplicity. Players don’t have to concern themselves with scrubbing up on the ins and outs of complicated Free Spins features, but can instead enjoy an uninterrupted gaming experience that can award incredible prizes on any given spin.

Couple this with the slot’s high volatility and 11% hit rate and Winnergie is the perfect game for both seasoned slot aficionados and those who simply want to jump into the action right away. Available at stakes ranging from €0.05 per spin all the way up to €100, the game is capable of catering for players of all different bankrolls and playing styles and can also be supplied in almost 20 different languages.

Like all other Swintt slots, Winnergie is completely optimised for mobile and can be enjoyed on most major smartphone and tablet devices. The game’s simple layout, bright visuals and input-free scatter feature make it the ideal title for fans of gaming on the go, no matter where they happen to be playing.

David Mann, Chief Commercial Officer at Swintt, said: “While Swintt is a brand that’s well-known for innovative gameplay mechanics like XtraWaysTM, XtraLockTM and XtraStreakTM, so-called “classic” slots are considered classics for a reason – namely their iconic design and intuitive, user-friendly gameplay.
“Our Premium range of games has always tried to adhere to these values, and in Winnergie, we’ve really perfected the formula. The game features iconic fruit machine symbols, a simple but rewarding scatter bonus and huge multipliers of up to 1,000x players’ stake. Combined, we think this makes Winnergie an instant classic in its own right and we’re sure the slot will prove a huge hit with players.”