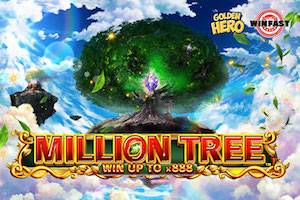 The latest game release from Golden Hero is a cooperation with pachislo developer JTG and is a 3-reel and 1 payline slot game. It might look simple but looks can be deceiving, this game will shake your world and the Million Tree can give players both luck and prosperity!

Million Tree is a low volatility game with wilds, multipliers and respins. The game is fairly straightforward. Get three specific symbols on the payline to get a win. The wild symbol can substitute all symbols and will increase the chances of a win. A multiplier may apply to the payout when the wild symbol stops on the payline. Wins up to x888 the bet with the Wild symbol is the maximum in Million Tree.

To add the interest and excitement to the game lightning and wind has been added to increase anticipation of possible game features appearing. When lightning appears on the screen wild symbols may appear more frequently with bigger chances to win if the wild stops on the payline. Similarly, if you see wind blowing over the screen as it means that reels will respin if a win is not triggered, so keep your eyes on that windy win.

When the world tree shakes the reels expect something special can be expected and when the fruit of happiness is growing on the world tree it brings wealth to the player.

Even though Million Tree is not a pachislo, JTG has definitely included some of those special anticipations usually seen in pachinko inspired slot games. This game will work in all markets and is a great way to introduce the pachinko inspired games to markets outside of Japan.