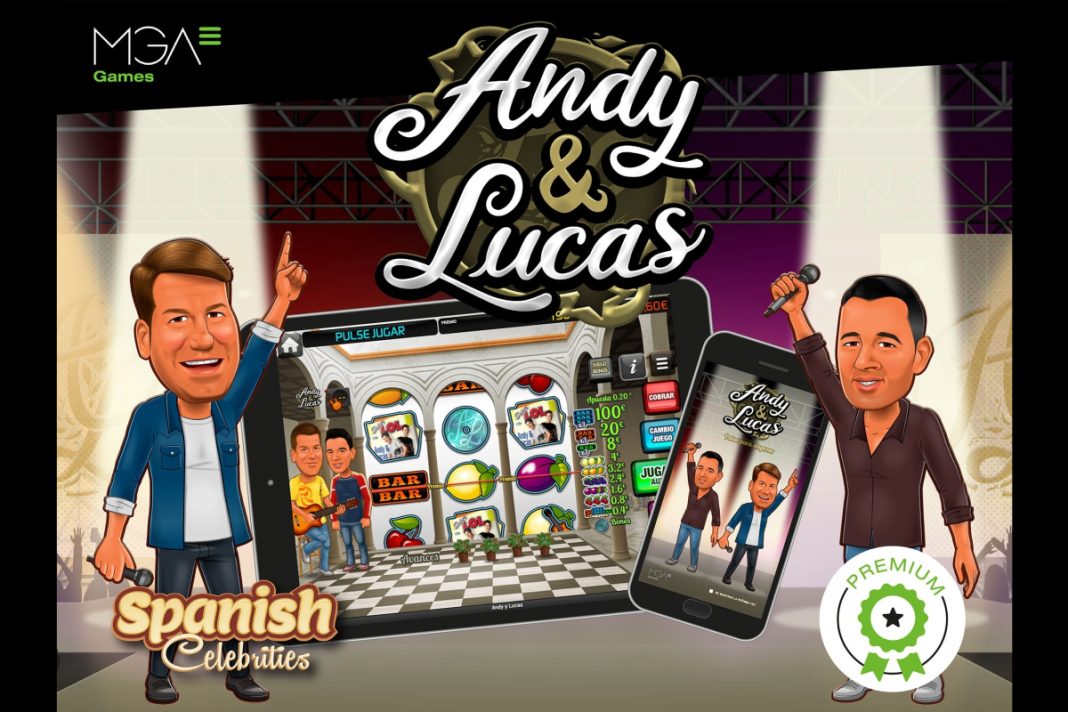 Launch of the latest slot game in the MGA Games’ Spanish Celebrities series, featuring icons from the Spanish music world.

Once again, MGA Games goes that one step further and offers a slot game with music and live vocals exclusively recorded for the company by the famous Spanish pop duo Andy & Lucas.

With only a few weeks left until the end of 2020, MGA Games aims to end the year with a real blockbuster – the launch of their latest slot game in the Spanish Celebrities series, Andy & Lucas.

This sensational production with which the company, specialists in the development of local slots for global operators, helps close a difficult year in the best way it knows how with high entertainment and exceptional content.

Cadiz’s famous pop duo Andy & Lucas, Andy Morales and Lucas Gonzales, with millions of followers throughout Spain and the Spanish-speaking world, are the characters in MGA Games’ new slot game.

For this musical adventure and a new instalment in the Spanish Celebrities series, MGA Games has had the pleasure of collaborating with the famous pop duo who, being fundamental to the project, have helped in ensuring what we think you will agree to be a great final production.

Great hits such as “Son de amores” or “Tanto la quiero”, songs from their live concerts which led Andy & Lucas to fame and success, have been used in the game’s audio. However, in addition, and in keeping with their philosophy of always going one step further, MGA Games is offering a special version for bonuses, prizes, and advances, with vocals recorded especially for the company by Andy & Lucas.

What’s more this slot game includes four fun mini-games that allow the user to relive the musical duo’s initial stages as well as their current success where they continue to tour and play concerts in Spain. Users will have a great time with the Termite 2.0 mini-game, which is reminiscent of Andy & Lucas’s interview on a popular television talk show. They will travel with the musical duo to Cuba to experience their international successes in different Latin American countries. They will be able to see them perform at the Cadiz FC football stadium, the team for which they composed the centennial song and which can also be heard in the mini-game. Or users will be able to choose between the different teen magazines on which Andy & Lucas are featured and which also hide more prizes.

With Andy & Lucas, MGA Games will say goodbye to 2020 at the top of their game expecting 2021 to be an exceptional year for the company, as they recently announced a few weeks back on MGA Games Day.

Andy & Lucas is available on all devices and for all main online casinos in Spain, starting this Monday, December 14.