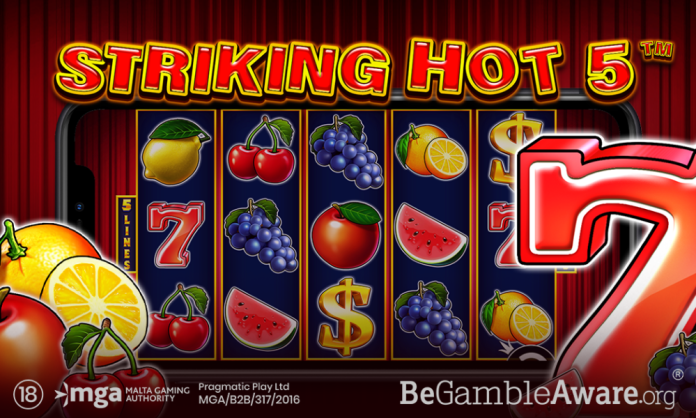 Pragmatic Play, a leading content provider to the iGaming industry, has fired up a reimagining of a classic fruit machine in Striking Hot 5™.

Played across 5×3 reels, Striking Hot 5™ is home to traditional land-based casino symbols such as cherries, grapes and lemons which must form matching combinations across the titles’ five paylines to award a win.

The slot also has dollar scatter symbols on its reels which can pay regardless of their position on a payline if three or more are landed anywhere on the game grid. The biggest win potential is found within the seven symbol with a line of this alone awarding 1,000x.

Striking Hot 5™ follows in the footsteps of recent hits such as Black Bull™, Greedy Wolf™ and Gorilla Mayhem™ which reside amongst a collection of over 250 titles in Pragmatic Play’s award-winning games portfolio.

Irina Cornides, Chief Operating Officer at Pragmatic Play, said: “Drawing inspiration from the timeless classic of more traditional land-based slot machines while modernising some of the gameplay elements means that Striking Hot 5™ has been developed to have universal appeal.

“The title also benefits from having some of the big win potential more commonly found in online games offering players a huge max win of 5,000x within its retro gameplay, which will be a draw for new and existing fans of more traditional titles.”

Pragmatic Play currently produces up to seven new slot titles a month, while also delivering Live Casino and Bingo games as part of its multi-product portfolio, available through one single API.