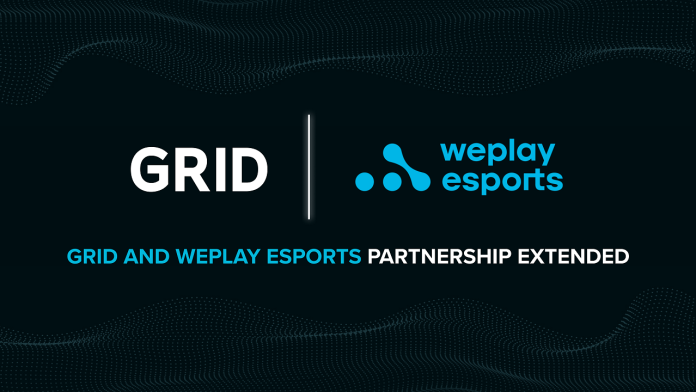 GRID, the official esports and gaming data platform, and WePlay Esports, the flagship company of WePlay Holding, have extended their exclusive esports data partnership for a third year.

The deal will focus on data assets management, distribution, and monetization for all WePlay Esports broadcasts. Additionally, GRID will provide advanced integrity and data security services.

Charlie Hanley-Nickolls, chief procurement officer of GRID Esports comments, “At GRID we are dedicated to building long-lasting relationships with our partners. Working with WePlay Esports exemplifies what it means to have a mutually rewarding partnership. For the past two years, WePlay Esports has elevated its broadcast and improved the interactive experience of esports content. We are thrilled to continue leveraging WePlay Esports data and providing them with the assets they need to continue to be a leader in broadcast innovation. Their approach to fan engagement is a benchmark for how official esports data can be used as fuel to grow the industry as a whole.”

In 2021 GRID supported WePlay Esports in some of the most viewed esports tournaments of all time. The partnership included all the company’s CS:GO and Dota 2 tournaments and the most notable Russian-speaking broadcasts. The record-breaking PGL Major Stockholm 2021 broadcast by WePlay Esports peaked at over 865,000 concurrent viewers during the final match between NAVI and G2 Esports. WePlay AniMajor, the anime-themed Dota 2 competition, set an additional record with over 37 Million hours watched.

Valentyn Shevchenko, head of business development at WePlay Esports, says
“In 2022, our goal is to continue expanding our portfolio to include more genres and focus on organizing themed events. Across all our initiatives, we aim to continue our innovation and enhancement of WePlay Esports data. Our partnership with GRID allows for the maximum leverage of our data assets, and elevates the WePlay Esports signature broadcast experience”.

GRID partners with the rights holders in esports & gaming to leverage the potential of their data IP. This enables sustainable growth of the entire competitive gaming ecosystem and empowers the esports community. The central technology piece of the company – The GRID Data Platform – unlocks additional revenue streams for its partners and capitalizes on the potential of data in digital sports for the purposes of storytelling, fan engagement, and integrity.

WePlay Holding is an esports corporate group with headquarters in Los Angeles, U.S., and Kyiv, Ukraine, which has offices around the world together with its affiliates. The multi-brand holding company is bridging the gaps between entertainment, esports, and technology through its innovation strategy.

Since 2006, the WePlay brand is well-known for the high-quality organization and broadcasting of esports tournaments. It grew into WePlay Esports, a world-class tournament organizer and production company with studios, talent crews, and arenas operating across multiple continents.

WePlay Holding puts together its technology ecosystem to create unique results. It aims to bring together brands, investors, nonprofit organizations, industry experts, and other stakeholders into a playful prosumer environment.

Huge wins await in the Dragon’s temple in Megapearl Gigablox™